One of the tough things about Whole30 [in my opinion] is the lack of CRUNCHY foods. You aren't allowed to fry anything so even though meals are super tasty [ Salmon w/citrus salsa, Spaghetti Squash, Zucchini Poppers] they are all pretty soft. My palate was craving some crunch and after perusing recipes I came across the two below. BOTH are super easy and really jazz up food in my opinion.

Porkitos aka Prosciutto Crisps:
I found this recipe via Nom Nom Paleo and it is super simple. I'm talking you need five things simple: prosciutto, tin foil, cookie sheet, wire rack and your oven. Full disclosure, Whole30 prosciutto is NOT cheap, but understand these cracklins can be used in multiple different ways and don't contain those nasty sulfates in regular prosciutto.

Nom Nom has great step by step instructions, but here is the quick and dirty. Preheat oven to 350. Spread out prosciutto pieces on a tin foil covered cookie sheet [to keep clean up to minimum and to keep prosciutto from sticking]. Place sheet in oven for 10 -15 minutes and watch your crisps the last few minutes so they don't burn. 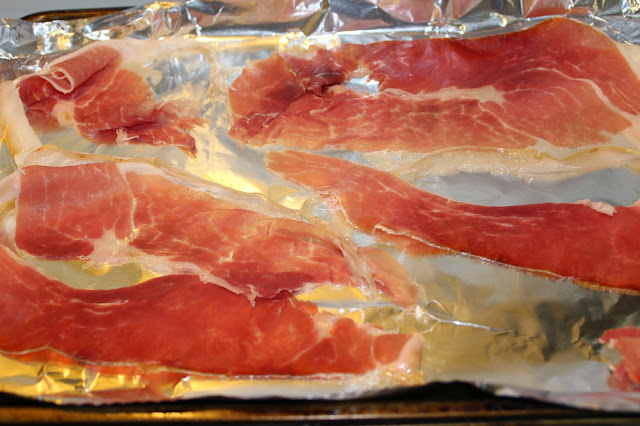 When they are done, remove from oven and place pieces on a wire rack to cool. They will crisp while cooling so don't fret if they still feel soft when you move them from the pan. 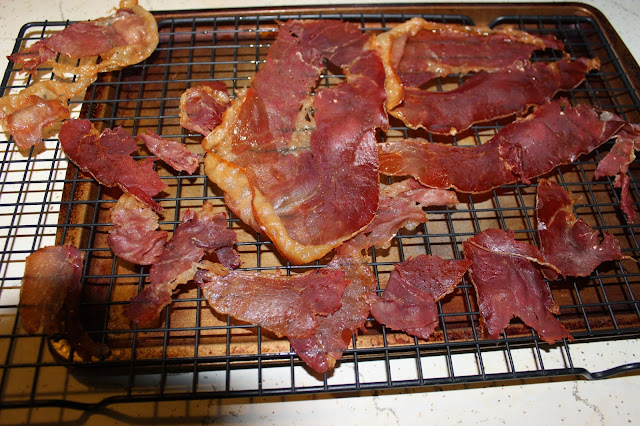 Once they cool, place in an airtight container in the fridge to keep fresh. I added pieces to my salads, deli roll ups, eggs, and sometimes just snacked on a piece when I wanted something crunchy. Easy, tasty and functional, YUM! 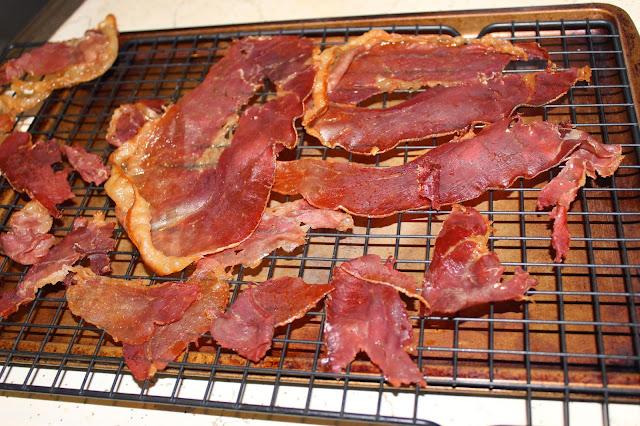 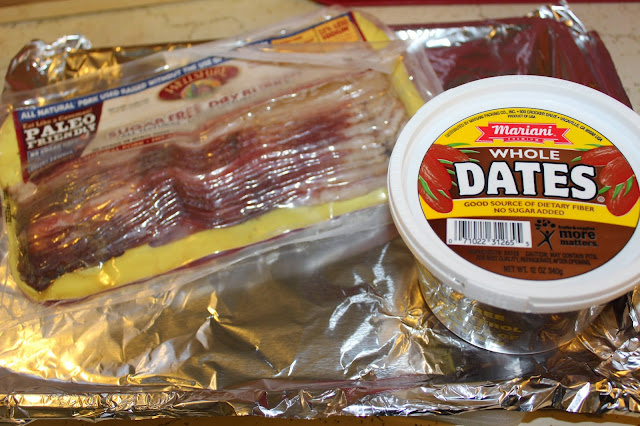 Make sure you buy the pitted dates, otherwise you'll have to slice into each one to remove the pit [totally the pits, hah] 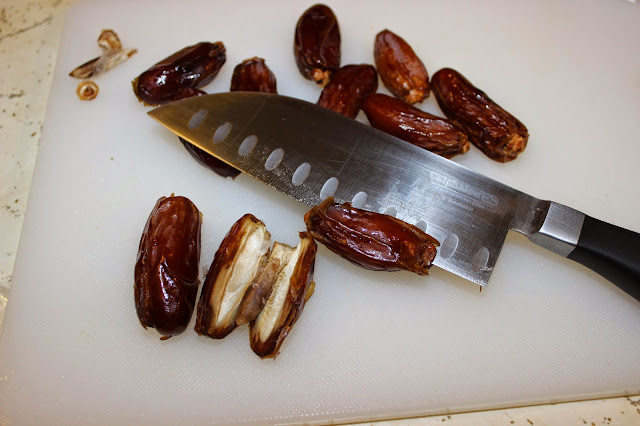 Cut your bacon in half [or thirds depending on how many dates you are wrapping] then wrap your date with a piece of bacon. 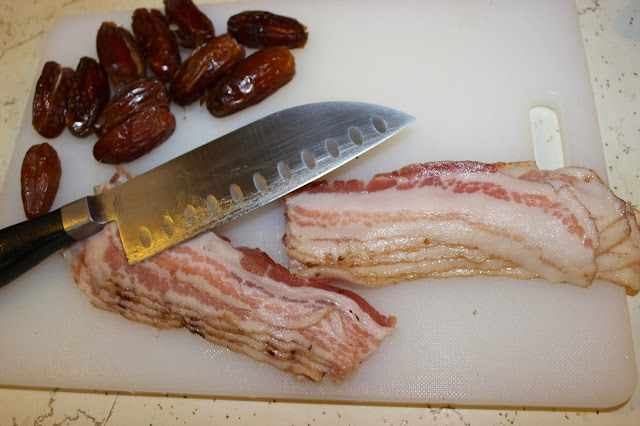 Place on cookie sheet [on tin foil to make clean up easier] and bake at 350 for 10 - 20 minutes. You want the bacon to be a bit crispy but you don't want to overcook the dates. 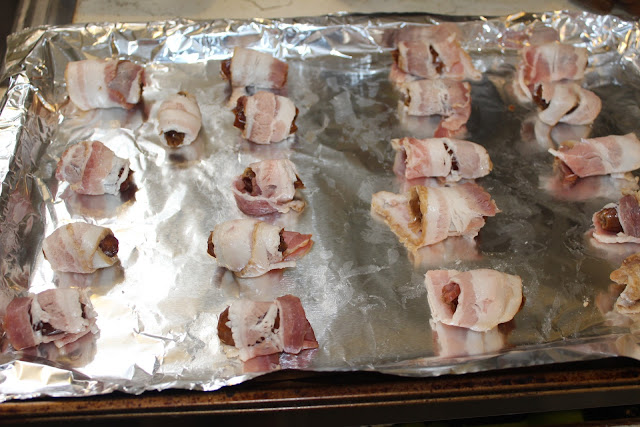 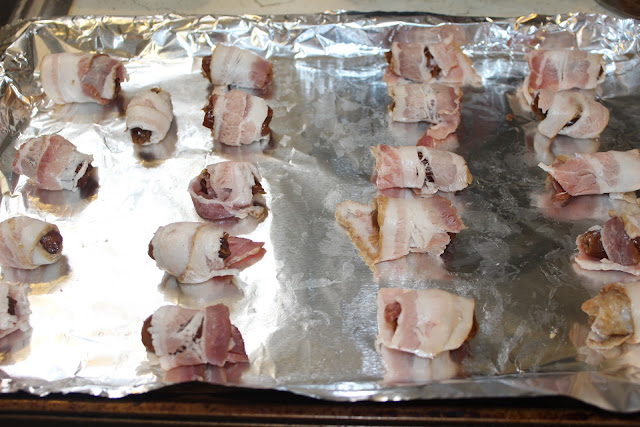 When the dates are done, remove the pan from the oven and then remove the dates from the pan. Place them on a paper toweled plate to get rid of the excess fat. Note: These are on more one the DONE side because I HAAAAAAAAATE soft bacon, seriously grosses me out. Many other versions are a lot less crisp so make sure you don't over cook them. 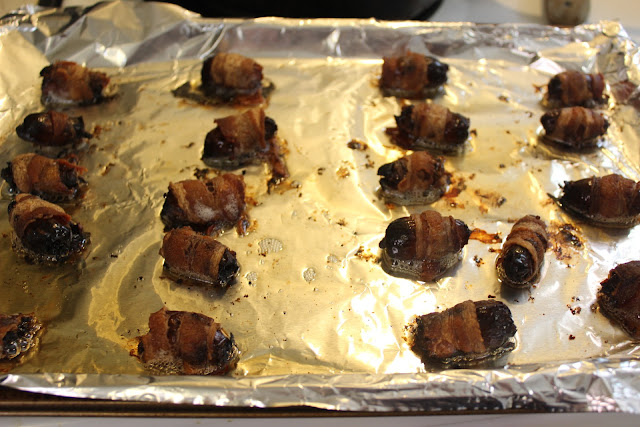 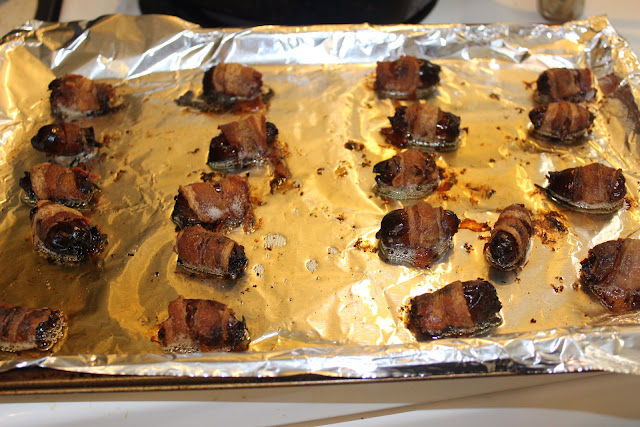 Plate up to serve a party or place in air tight container to store in the fridge. I will have one or two a day for an extra special treat while eating Whole30. The sweetness from the date and the smokiness from the bacon is perfect to curb any form of sweet or crunchy craving. If you REALLY want to up the ante - and aren't eating Whole30 - stuff the dates with a lil goat or manchego cheese for a deliciously gooey center. 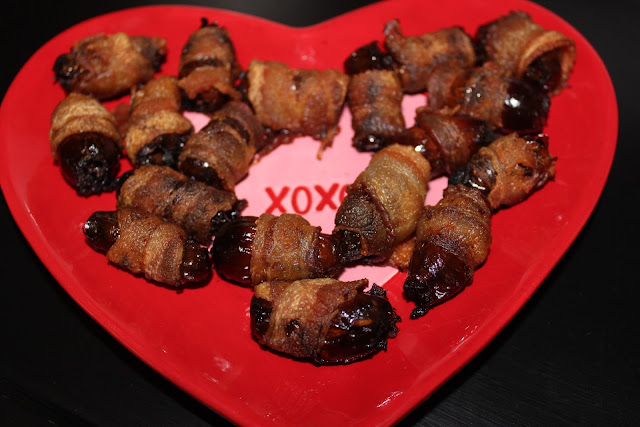 Whole24 aka almost Whole30 part three.
Yup, part three y'all. Well, kind of. I skipped the last three day because we were in Orlando for kickball and I was meeting THE GIRLS for a HH. Ain't nobody got time for Whole30 on a blate, right?

After a super diligent winter and spring I really let my diet and fitness routine go over the summer. All the weight I lost doing my previous Whole30s was right back on my hips because I was indulging in whatever I wanted, whenever I wanted. I'm talking Starbucks for breakfast, Chipotle for lunch and Z burger or pizza for dinner. Yeah, it was bad and I paid for it in my bathing suit and in my energy. I knew something had to change and really wanted to get back on track before the holidays. I like to indulge in homemade treats and a few extra glasses of champs during celebratory times and KNEW I would feel like doodoo come January if I didn't get everything in check.

I CONFESS, this was not a complete Whole30. I only ate a Whole30 diet for 24 days so I did miss out on the extra six days of benefits. I also did NOT follow the true Whole30 template. There were snacks -- healthy ones -- and I did not adhere to the portion aspect. I simply ate ONLY foods allowed on the Whole30 program [which you can find *here*] and tried to limit my complex carbs as much as possible.

This round fluctuated between being the easiest of the attempts and the hardest. Easy in the fact I knew what was coming, I was comfortable with the program and I had a list of foods I enjoyed. Hard in the fact I was doing Whole30 while Le Husband was just counting his macros and I also weighed myself everyday. Watching Le Husband eat whipped cream, homemade pasta noodles and Pollo Rico rice was NOT fun at all, but I stuck to my guns and didn't cheat which made me feel awesome at the end. Checking my weight everyday was awesome in the beginning because I lost four pounds almost immediately, but after week two my weight pretty much plateaued which was TOUGH when I was eating so clean. There was a point during the last week where I turned to Le Husband and said "If this wasn't the last week, I would quite just now because this is so frustrating". I totally understand why they don't let you weight yourself until the end of the Whole30 program, it would be SUPER discouraging the first time to watch numbers fluctuation so much.

Here are my Round Three results: 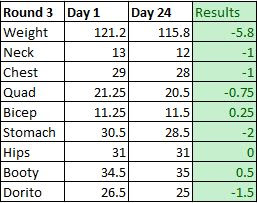 I honestly thought my weight was going to drop more because of everything I packed on, however this round I was still lifting heavy and doing BODYPUMP classes and training so I leaned up more than lost weight. Two inches of my stomach was awesome and almost two off my dorito was even better. Le Husband even told me he noticed my dorito last week so that was great to hear as well. FYI: We call the dorito the spot where your body starts to triangle down to your waist, kind of like a Dorito chip. Basically it is two inches above the belly button if you want a point on the body to measure.

Overall this program helped me reset and get me closer to where I want to be health and body wise. I am ADAMANT about continuing Whole30esque [90% -10%] until Thanksgiving and then will only indulge in homemade treats and a few drinks splurges here and there. Whole30 is work, good work, but still work so I don't want to go off the train like I did this summer. I already gained two+ pounds back after my eating bonanza in Orlando so it's back on the healthy train until Thanksgiving. I'm slowly wrapping my head around not getting to my goal 'weight' because of my muscle, so now my goal is to stay lean and keep these abs as long as possible. #babyabsshowingupfinally #pleasedontleaveme


Have you tried Whole30 yet? If so, what did you think? Are you interested in trying Whole30? I personally think everyone [except prego mamas and vegetarians] should try it once, just to TRULY understand their body. I've had quite a few people ask me about my experience and I have NO problem chatting via email about my thoughts. You can check out my previous Whole30s *here* and *here*!