I Confess… I Don't Do You

Morning, dear friends of mine. Thank y'all so much for your kind words and pump ups yesterday. I'm usually not a ranter, but man that commute was a bear. We're all good now and I'm thankful everyone I love is safe and sound.

Today is a fabulous day, as CONFESSION WEDNESDAYS are back y'all. I'm still uber sad Kathy has left the blog world, but I'm super stoked Melissa has taken the confessions linkup and brought it back. I've really missed my weekly confessing and reading all your confessions, too. And I kind of love this guy's face ;)! 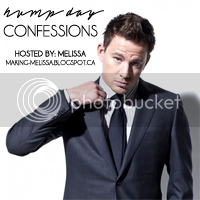 With this being the inaugural Wednesday, I thought I'd try something different. Instead of confessing the funny, I'm confessing the people I've decided have NO PLACE in my 2015. Everyone you meet in life teaches you something, whether it's good or bad it's something. The people below have taught me what I don't want/need in my life and why leaving them behind is a good thing.

Hypocrites: Rude people are annoying. But more annoying than people that continually rant about infractions, are people that refuse to admit their faults, yet continue to call out others. Or what about that people that are just as guilty of "said infractions"? I've heard you complain about your mom, your boyfriend, your in-laws, bridesmaids in your wedding and everyone in between. Yet, when someone says something that's not GLOWING about you, they are the worst person in the world. Talking smack about their 'ugly hearts' only proves your heart is just as 'ugly', congratulations on looking like a fool.
Goodbye, hypocrite. You've taught me that I don't want to be seen as a fool, so I'll be sure not to complain about things that I am guilty of doing to others.
Constant Complainers: You know what I'm talking about right? The person that has a put down about every situation. "How are you this dreary grey day?" when it's just cloudy. It's always too hot, too cold, too cloudy, too sunny, too everything and they let you know it. Having a meeting is torture, even though the meeting happens every week [and I'm pretty sure you have zero knowledge of torture]. Now, don't get me wrong, I complain, a lot. But, 99% of my complaints are about things that drive me nuts at the moment and then I move on with life. I don't live to complain, that's just too exhausting and no one wants to be around a Debbie downer all the time.
Goodbye, complainer. You've taught me that listening to complaints on a daily basis is draining. I want to be the friend that lifts my friends up and doesn't constantly bring them down.

Do Nothings: If you have  a problem, fix it, that's my mentality. Obviously there are times and situations that we can't fix by cutting the bad out [family problems, work problems] and if someone is stuck in that situation, I'm more than willing to be a listening ear. However, those that complain about situations they can change drive me bonkers. If you're the whipping boy/girl of your group of friends and you don't like it, get better friends. We're not in college anymore and being popular is no longer the 'cool' thing. Being happy is what matters, so grow a pair and walk away. Or stop complaining about it, because it's a situation you are choosing to be in, so no sympathy here.
Goodbye, do nothings. You've taught me that inaction is weak and can be seen as a call for attention. I am now more mindful of issues I bring up to friends, because I don't want to be seen as a pushover or someone that doesn't take action when I should.

Compulsive Liars: One of my college ex-best friends was a compulsive liar, but it was something I didn't seen until everything blew up my senior year. She had an explanation for everything, which often made sense at the time, but looking back there were soooo maaaannny stories. And so many stories that were untrue. When we finally caught her in all of her lies it was heartbreaking to realize how easily she hid the truth. Obviously the friendship ended right out of college, but I still find myself looking back when I think I've caught others lying.
Goodbye, compulsive liar. You've taught me that getting caught in a lie is not a place I ever want to be caught. Lies lead to deceit and trouble and those are both things I have no interest in pursing.

Instigators: These people really grind my gears. The Facebook, Twitter, blog and forum poster that just says things to piss other people off. Honestly, I used to get pretty worked up about posts. I used to let those people make me angry, hot under the collar and I'd stew trying to think up the perfect response. But then I realized, most of the inflammatory posts were for attention and to get people ticked off and by letting them 'get to me' I was supporting their purpose. Now I try to avoid those people/posts like the plague [thank you hide status on Facebook application] and count to ten after reading a particularly ridiculous post. Y'all ain't worth my thoughts.
Goodbye, instigator. You've taught me to think twice before I post ANYTHING. I don't mind sharing my opinion, but I will NOT be someone that just post opinions for shock value.
Copy Cats: You'd think I'd be used to copy cats being the eldest of three girls, but no, I'm here to tell you I'm not. I get that copying is a 'highest form of flattery' but after awhile it just gets old. NOW, don't get me wrong, I understand that fashion is all about imitation and that we often replicate things we like/see. Nine times out of ten it's after a conversation of "Hey, I like that, thanks for the idea/fashion thought/post", so you're giving the credit to the person due. I admit I've used ideas I've found in blogland, but I have done my best to give credit and often will email the 'creator' with a 'please and thank you'. But, what I can't stand is a person that copies without giving credit. Or copies your friends, [both in real life or in blog land], your layout, linkups and even your mannerisms. It's not flattering, it's just weird.
Goodbye copycat. You've taught me that being an original is better than being a copy. Because of you I'll be more mindful when I see something I want to imitate. And I'll make sure to give credit where credit is due.
2015 has just started and I hope I'm able to keep the positive in my life. Last year I learned about what I will tolerate and what I don't need, so 2015 is the year of being true to me and my happiness. If you aren't contributing to that, #ByeFelicia!


Who are the people you won't tolerate anymore? How did you remove a negative person from your life?