Morning, bunnies! Woohoo, bring on the Friday train, right? Even though I've only worked three days this week, it's been a crazy week and I'm still recovering from my incredible trip to Ft. Worth/Dallas, Texas. Our super fun delay [hah] stole some of the extra sleep I planned for the week, but oh well, we've finally made it to the end of the week and it's almost Le Husband's birthday weekend [woot woot]. We will be doing some fun celebrating, of course, but I am soooooo excited to be at home with NO WHERE to be this weekend. Le Husband and I have been living out of suitcase since Christmas it seems and I'm ready to pack all my travel things away until next month. The adventure has been awesome, but my body needs a break.

Speaking of A D V E N T U R E this past weekend was one of the most spontaneous and memorable weekends of my life. Back in December, at my BOFF's wedding, Le Husband, myself and Lynn's BIL/SIL were all Buckeye's fans #gobucks! Well, as you know OSU was ranked #4 in the College Championship tournament and we all said if they beat Alabama we would crash Lynn and J's place for the championship game. Obviously there was hope we would be heading to Texas, but after some heartbreaking losses in the past no one was holding their breath. Well wouldn't you know, those Bucks SPANKED the Crimson Tide and punched their ticket to the National Championship. During the game I was texting BOFF and after OSU won she said "come on down" so the trip planning began. Everything was planned, booked and bought in a week and six days after we returned from Columbus we were on a plane to Ft. Worth. It was a whirlwind, but it was a fanfrickingtabulous whirlwind.

Here are my faves from our trip.

In Real Life Moments: While this trip was planned because of a BIG event, the weekend was full of sweet and chill moments that just felt like real life. BOFF and I commented multiple times how nice it was to just hang at her place, making food, watching football/shows and just being in sweats chilling on the couch. Her puppies are the CUTEST lil things in the world and you better believe I soaked up all their cuddles and kisses [hi Chloe and Sophie]. Sunday night we watched Downton together and I had a moment of 'this is soooo natural' which was kind of cool.  Le Husband and I were also able to make it to the gym which was fun, to keep it a bit routine. I got to break in my bright fancy workout pants and I LOVE THEM!!! 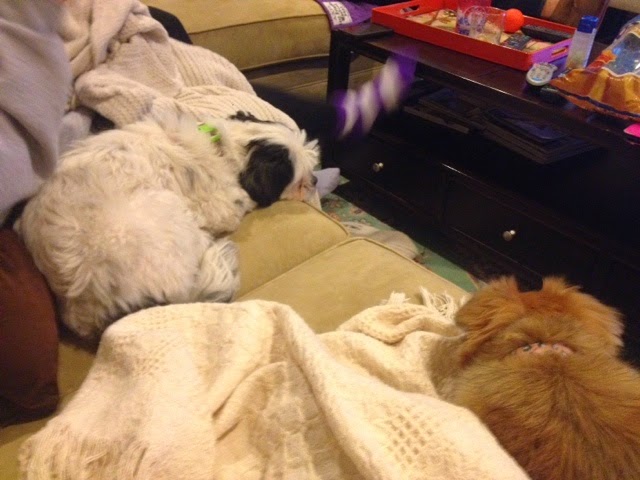 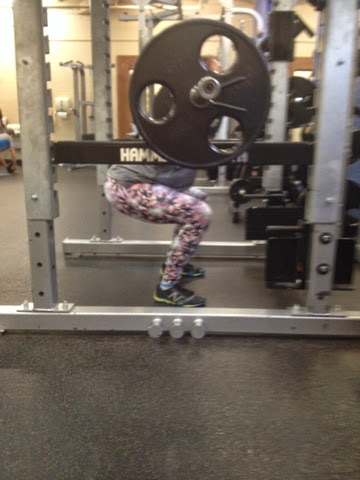 College Game Day: I LOVE watching CGD on Saturday mornings and envy all the school kids that get to be part of the broadcast process every week. Samantha Ponder is one of my favorite gals on ESPN and sadly she was already downtown during our visit. We were able to see the game day crew multiple times and each time it was fun to be in the background and possibly make it on TV! 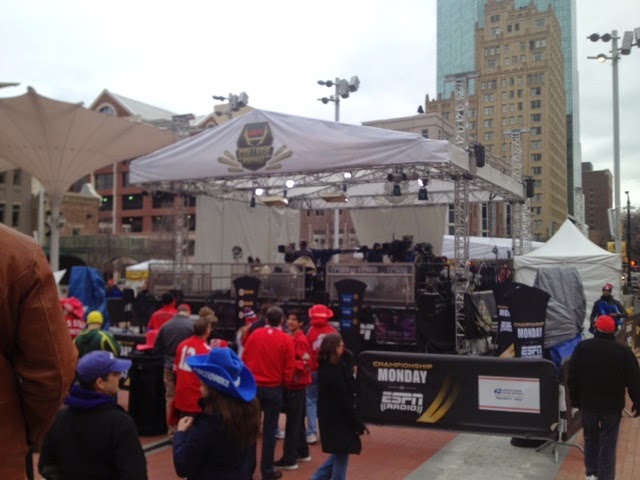 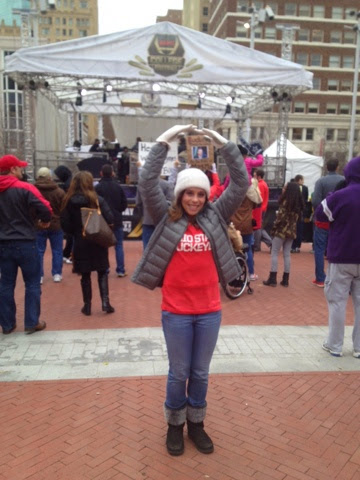 AT&T Stadium: Y'all, this stadium is beyond words. It looks big on TV, it looks big in pictures but NOTHING can transpose the massive size that is Jerryworld. Everything about AT&T is impressive, the look, the field, the outdoor decorations, the food and you know, the six cars on a platform. 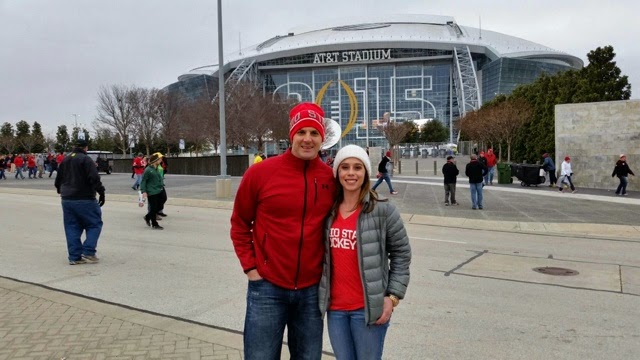 We attended the sponsored Tailgate and while it as incredibly chilly, it was a lot of fun. There was food, games and Zach Brown Band creating a fun and festive atmosphere. 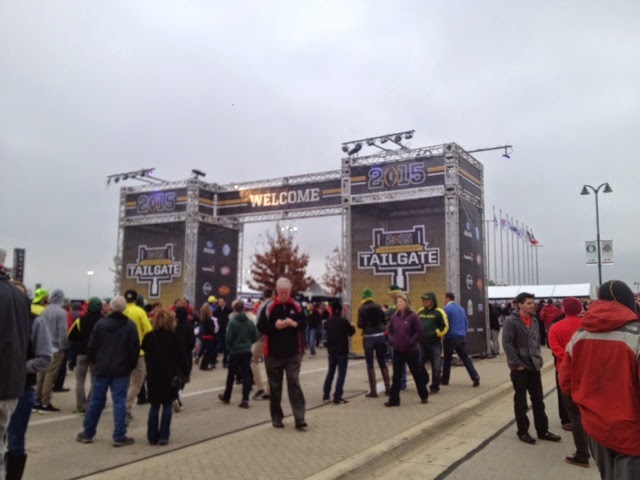 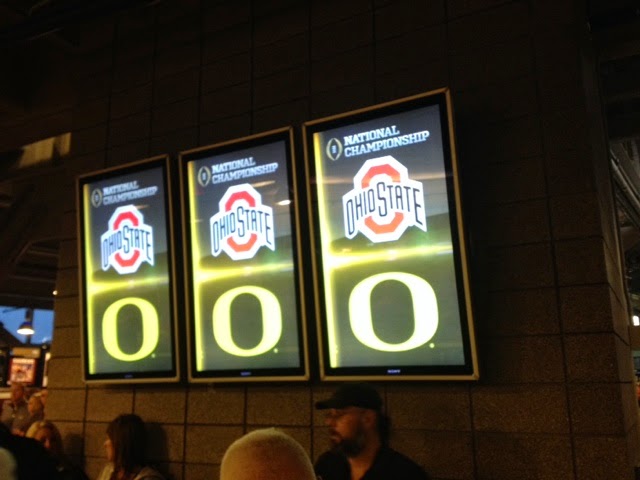 Our seats were right on the Oregon goal line, which meant we had a fabulous view of the 160 foot wide and 72 foot tall HD video board. It was hard to look at the field with that big board staring me in the face, but it was super awesome watching plays develop from our seats. 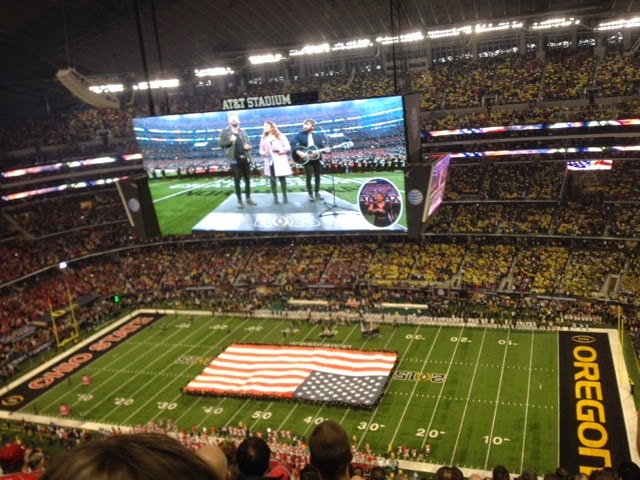 Flying Brutus was there to stand up those DUCKS ;)! 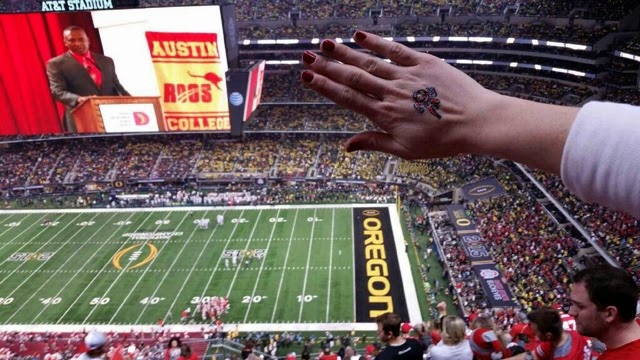 Watching marching bands is fun at college games, but watching it on the screen was even better. The BEST DAMN BAND IN THE LAND didn't disappoint and I have some sweet video of their Wizard of Oz themed show, complete with a Wicked Witch flight, the Scarecrow and of course a twister. 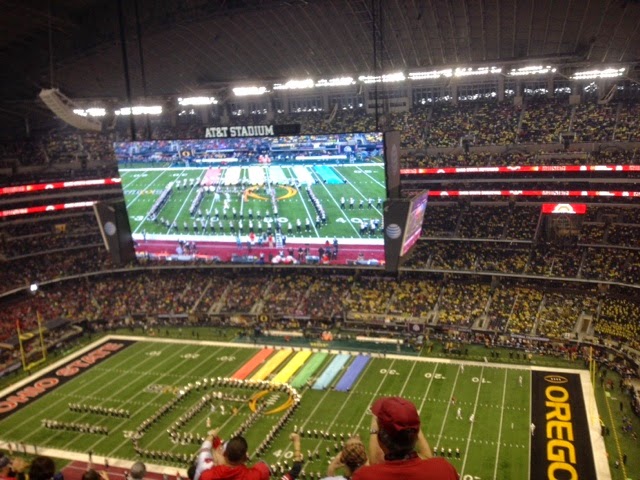 Sharing the Game with My Best Friends: A game is all fine and dandy, but getting to share the experience with Le Husband, my Boff and her husband made it THAT MUCH more amazing. It was awesome high-fiving everyone one during the scores, screaming for our defense and of course, cheering the victory at the end of the game. I bought matching OSU shirts for me and the BOFF and I think we looked pretty stinking cute, right? 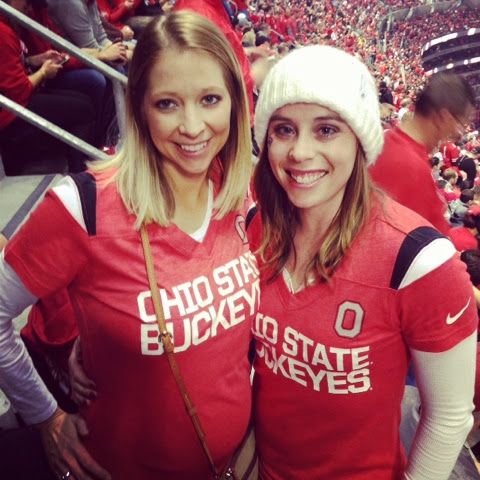 Frame worthy for sure! Love these awesome people and how similar we are to each other. 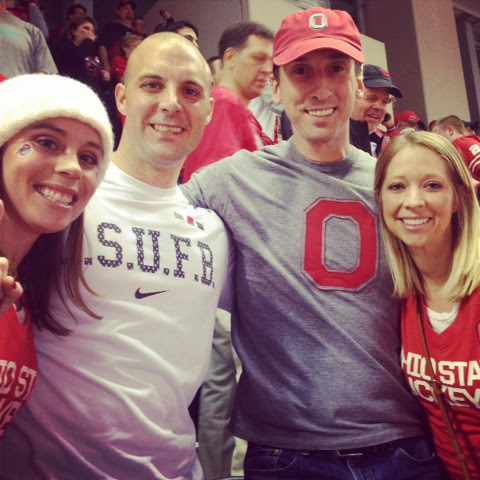 Le Husband and I were so thrilled everything worked out, because there was a lot of moving pieces that had to come together for this trip. I'm so lucky to have such a spontaneous husband and I'm so glad we are blessed enough to be able to take trips together. Guess who's starting a yearly trip to OSU?! 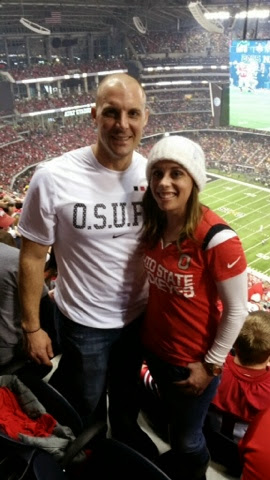 Winning! Winning! Winning!: I've won a conference championship in college with my soccer team, but it was a small affair. Obviously nothing can beat BEING the person to win a championship, but witnessing the team WE supported win was absolutely magical. The confetti, the music, THE BOARD and the shouting in the stadium was an incredible atmosphere. I started to lose my voice cheering during the game and I TOTALLy lost it when the game was over. Jerryworld had an awesome celebration at the end of the game and did an amazing job with the awards ceremony. Witnessing the FIRST EVER College Football National Championship was an evening I'll never forget and I was so thankful we were able to be there to witness HISTORY! 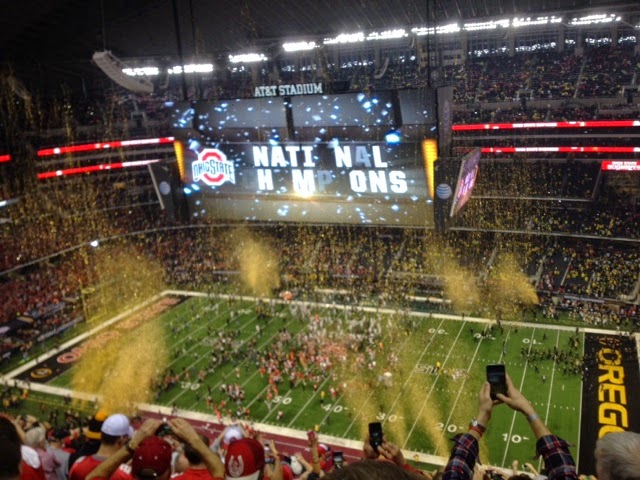 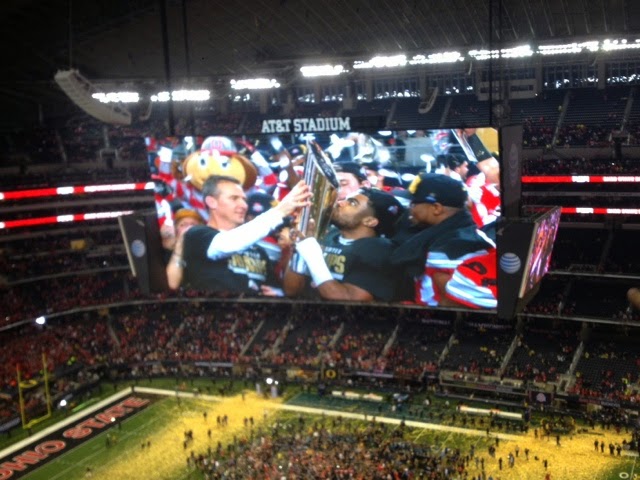 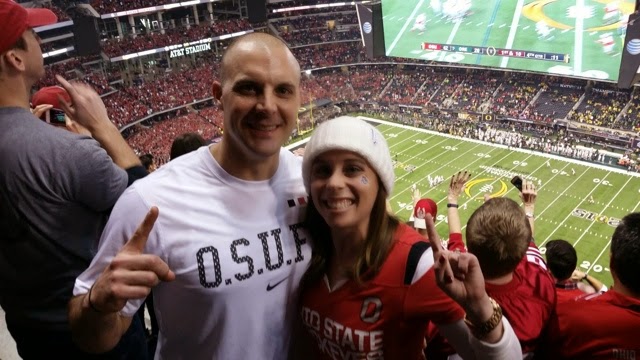 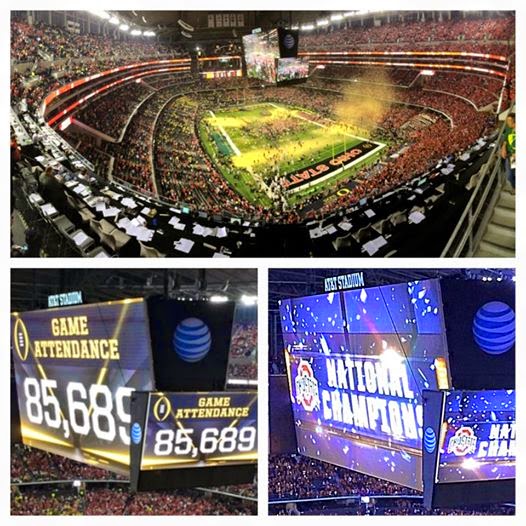 Those four days were so incredible and even though I'm a bit worn out, I'd do it all over again. It was so wonderful hanging with Le Husband, my BOFF, her husband and I miss them already. I can't wait for my next trip to Ft Worth and for our next adventure.

While we aren't doing anything major this weekend, tomorrow is a super special day in our home. Tomorrow is my dear, wonderful Husband's birthday, woooop woooop!!! I < 3 you, Husband, and am wishing you the BEST.DAY.EVER!!!! I'm so thankful we get to walk this journey of life together. You make me the happiest girl in the world! 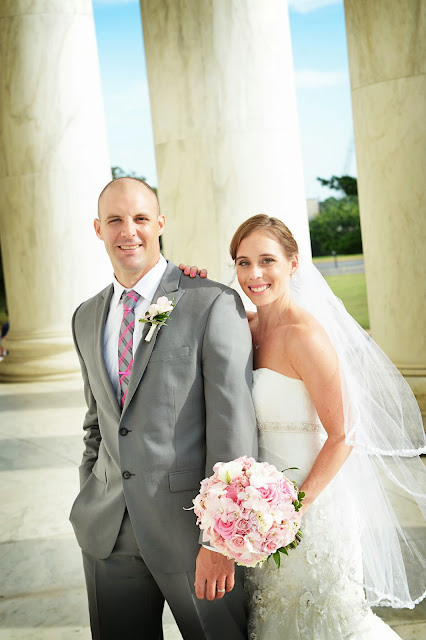