While perusing the blogs yesterday, someone's playlist made me STOP.IN.MY.TRACKS! The delicious beat bangin' was some OLD SCHOOL *NSYNC and I almost squealed at my desk. I haven't heard them in FOOOOOOOOOOREVER and that is a stinkin' shame cause, come on, how can you be down.sad.upset.anything.but.happy when you hear the lyrics
"You're all I ever wanted"?!?! Suuuuuuuuriously, you can't be in a bad mood.
So I decided to take a trip down memory(embarrassing) lane and list the BOY BAND slash Pop Princesses and Pop groups I use to listen to NONSTOP! No judging okay?!?! 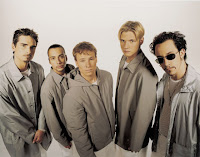 Backstreet's back ALRIGHT?!?! My single most FAVORITE pop song of the boy band era. This song was played onrepeatonrepeatonrepeat in my disc man (whoa so 90s). The first big boy band since BoyzIIMen took the preteen/teen world by storm and I was in the thick of it. I have seen them 3...yes 3 times in concert. And the last one I happened to be a senior in high school (again I say don't judge)! Nick Carter (prerehab) and Brian Little just made my young heart swoon. 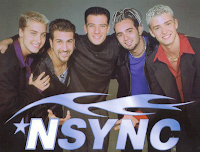 I want you BACK!!! Yes, pleeeeeeeeease come back *NSYNC, we miss you! While BSB (yeah, we were THATCLOSE) was my first Boy Band crush, *NSYNC was the group that stole my heart and became my first love. No, seriously, I was puppydog INLOVE with Justin Timberlake. I mean come on, check out those blond curls and try not to smile, I dare you. I have all of the *NSYNC cds (minus Christmas, mean old Santa) and LOVED every.single.one. These guys brought the fun, the hot, the beat and the dancing. Hands down, *NSYNC beats BSB for their dance moves in my opinion. I never saw my loves in concert, but trust me, I have PLENTY of VHS tape of their Disney Concerts (Thanks Daddy) 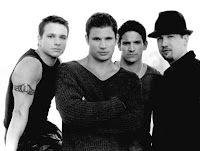 It's all Because of you! Yes, my smile is because of you Nick Lachey and friends. 98Degrees never garnered the same appreciate as BSB and *NSYNC which was always so sad to me. They actually created the group themselves and wasn't 'masterminded' by anyone. Good old Ohio kids (holla Cinncinati...C would be sooo upset I said that heehee) with dreamy voices and KILLER MUSCLES made for an swoon worthy mix. And who can forget MULAN?!?! Nick was of course my favorite and since he chose Jessica Simpson I was okay when he got married. He was so adorable on Newlyweds and I think I cried when I found out they were divorcing. I jumped from team Jessica to team Nick and have followed him ever since. 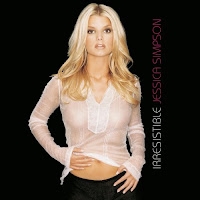 I wanna LOVE you forever!!!! And I would have Jessica, if you hadn't broken poor Nick Lachey's heart, gotten a BIG head about fame and eeesssh don't even get me STARTED on the John Mayer incident/years. But, your fall from my graces is another blog all together. Back in the day, YOU_WERE_MY_ALLTIME_FAVORITE!!!! Even though you didn't have the dance moves of the other pop princess diva's and even though many had you as the #3 blonde singer, in my heart of hearts >YOU<>NUMERO UNO! You were beautiful. You were intelligent (so I thought). You were kind. You had an AMAZING voice (pre-with you and your wishy-washy-whisper voice). And the kicker, you ACTUALLY stuck to your morals/values despite what the other girls were doing. I was TEAM JESSICA all the way! I religiously watched your Newlywed show and viciously defended you after your silly little gaffs on screen. But, then you got to big for your britches and left sweet Nick Lachey on the curb like an unwanted piece of furniture. Oh Jessica, I was so sad to jump ship, but looks like I did before the ship officially started sinking. 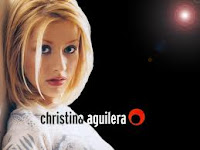 Come on over, Come on over BABAY!!!! LOVELOVELOVE that song. And really dug Christina's style for that music video too. She had left the fake 'Disney' look (Genie in a Bottle, great song btw) behind but wasn't quite in her 'Dirrty' stage either. This girl has a set of PIPES! And an ATTITUDE! And an addiction to red lipstick! She got waaaaaaay to raunchy for me, but 'Back to Basics' brought back alittle of that Genie in a bottle innocence. Super sad she and Jordan broke up, and poor girl just flubbed the lyrics to the Star Spangled Banner at the Super Bowl. Much better singer than Britney and way less classier than Jessica in my opinion. 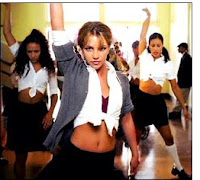 You drive me CRAAAAAZY!!! No truerer words were spoken about an artist, this girl WAS crazy. The first POP princess to debut, Britney created as much of a stir as the boy bands. Since the first mid-driff scene this girl has danced and song right alongside controversy. The outfits, the boob job, the V-card, Justin Timberlake, the cheating, Limp Bizkit, the python, the kiss, the sparkley outfit, K-Fed, 2 baby boys, the divore via text, GOING CA-CA-CA-Crazy, daddy's in charge, 2 new albums and a successful tour, new man, and now another new album in march. Suurrriously, she DID all that and pumped out album after album. As much as I CAN'T stand the girl and her drama, I can't help but JAMMMMMM OUT to her music. I take -alittle- pride in knowing she doesn't write much/any of her music, but, I still have to say 'Have you heard the new Britney song?' If only the Mickey Mouse club knew back then.... 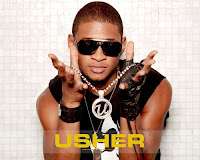 She likes it myyyyyyyyy way!!! Yes SHE/me does. Oh Usher I heart you. Your smooooooooth R&B croonings captured my heart back in the day. Although, it might have also been your beautiful eyes, abs, dashing smile, abs, outofthisworld dance moves and oh yeah YOUR ABS that broke me out of my only POP music bubble. I LOVED when you were dating Chili from TLC (OHMIGOSH I LOVE TLC) and was uber uber ticked when you broke up with her. Although, the break up did create some AWESOME music. I don't have any of your cds my love, but I continue to follow your music. You are the one guy, besides Fred Astaire, that I would do almost ANYTHING to dance with.
{Honorable Mentions}
BBMAK
~
Savage Garden
~
LFO
~
3LW
~
Mandy Moore
~
OTown (the performed at my PROM)
~
N2Gether Now
~
No Authority
~
Hanson
~
Jennifer Lopez (pre-JLO)

And there you have it, my list of shame...err LOVE!
Don't Hate, appreciate. :)
Are there any boyband slash pop princess diva's I forgot?!?!?