Hello friends, I'm back from sunny Florida and totally bummed out about it :(! Take me back to the warm sand, the pool, the beach, the friends and of course the SUN! I am soooo ready for spring it isn't even funny.

What was I doing in Florida for the weekend you ask?!?! Well, C and I were down there for a tournament with our....wait for it...KICKBALL team!!!! Yes, ladies and....ladies I play and compete on an adult kickball team. {I also play coed soccer, but that's a post for another time}. Before I talk about this weekend, I figure I should explain this kickball nonsense and how I got involved. 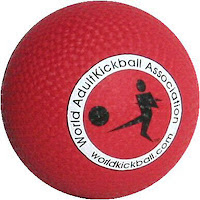 { Le Kickball}
I have been playing on kickball teams for the past 3ish years with my roommate P and a bunch of our college friends. This league is very much close to our place and more of a social league. But, last April I joined another, more competitive league. Not because I was THRIVING for more competition or anything, but because I am super fast (not trying to brag), athletic and can catch a ball. I wasn't sure about it at first because this would be a team made up of people I DIDN'T KNOW at all! Seriously, this was a huge step because I knew the guy who recruited me and that was it (and he was never at games). But, I thought I've never been to Vegas, I just broke up with GT and have nothing else going on, why the HECK not!?!? Can I tell you how nervous I was going to my first game??? I am a very out going person, but even I have trouble when I don't know anyone. Luckily, my team was made up of fun people who welcomed me quickly and graciously. However, I wasn't just nervous because of the social aspect, this was a WHOLE new way of playing kickball. Different rules, arguments, double plays, all I could think about was "what have I gotten myself into?" Anyway, long story short, I learned the new rules and quickly became known as 'The other fast girl' which I loved. Oh, and did I mention, this was how I met C? Yep, we met playing kickball, how dorky is that? I will tell our story in a later post though.
So what does this have to do with Florida you ask? Well one of the guys on our team has created a NEW kickball league which involves traveling for tournaments around the US. There are other tournaments in DC, NY, VA beach, Arizona, Las Vegas, California and I think Texas. Thankfully we don't have to participate in all the tournaments, but since it was cold this month and people wanted a vacation teams around my area elected to participate in the Florida tourney. Since no one could get a full team to commit a bunch of people grouped together and created a new team. And let me tell you, this new team was a lot of fun. Most people chipped in a got a house together right off the beach for the weekend. However, since I am the LIGHTEST sleeper in the work, C and I got a hotel room half a mile from the house (which turned out to be the best decision ever because there was DRAMA at the house) 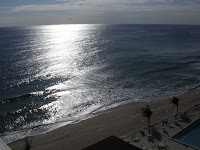 {The beach, the coast, the best place ever}
The tournament was fun, tiring and sadly too short. We were out after pool play and I was UBER pissed about it. But Saturday night was fun hanging out with friends and watching crazy shenanigans. Thank goodness C and I had an early flight Sunday morning because we were able to plead off of too much partying and staying up super late. We saw some funny things though thanks in part to '18 Dummy Juice!'
What is Dummy Juice you ask?!? Honestly, I can't tell you I 100% understand the whole 'Dummy' concept but the crew we were hanging with loved it. Short story, there is a rap group called 'The Federation' that created a rap song back in the day called '18 Dummy' and it's a ridiculous rap song. Well, one of the guys who perpetuated the 'Dumminess' decided the drink below would become the drink of choice.

{18 Dummy Juice}
Blech, I am NOT a tequila fan....unless it's in a Margarita ole! I'm actually not a huge huge drinker but enjoy having girlie drinks. I HATE and can't drink beer so my friends tell me I'm snotty. Eh, what are you gonna do? If I don't like the taste why drink it right? Okay, I'm digressing and randomly typing ooooppps. All in all it was a great weekend. C and I had some quality vacation time together and I played a really good tournament. We got to see friends we enjoy and I made some new ones in the process which was awesome. Tons of fun stories I can't share of course. :)
I will leave you with a picture of me from the field. Yes, I rock a bandana on the head cause I'm hardcore :) 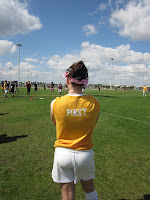 Have a great weekend friends!
Happy early 25th SportySpice! I Love you!