Thoughts on a Thursday

Not much going on today, so I'm swiping [swipper no swiping] my post today from my dear dear friend Carolyn. She is bomb.com go check her out!


Thought Number 1: Why do ankle sprains take so long to heal? I'm still dealing with the drama of my MILD ankle sprain of 3 weeks ago. Yes, I can run and cut. Yes, I can lift. But, YES it still hurts and it's "driving me nuts" a la Makenzie of T&T fame. I have a kickball tournament in Boston next weekend and we don't have any girl subs. My ankle has exactly 7 days to get it's act together. 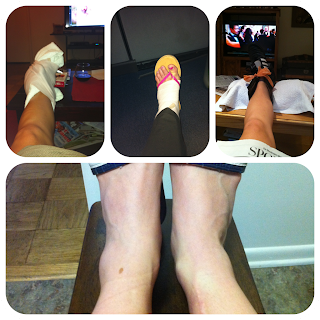 Thought Number 2: I'm nervous as HELL for my kickball tournament next week and I have no idea why! I'm an athlete, I know what to do and how to play. Realistically, I've only been out of commission for 3ish weeks because of my ankle. But, for some reason I feel as though it's been months! I missed  a tourney my team won because of vacation and I was hurt when we won the season championship, which I think is effecting my psych. Right now I feel like the JV girl playing up with the VARSITY which is so stupid. I've been with this team for a long time and I know my ish. I just need to trust myself, but that's hard. 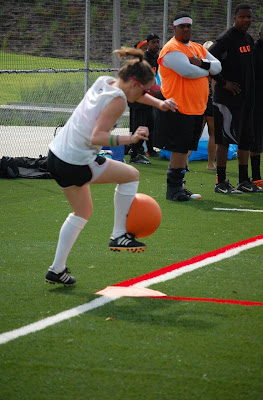 Thought Number 3: My fall/winter activity level is redonkulous. Normally, I'm a pretty laid back chick. I don't like to have things to do on the weekend. I'm much more of the go with the flow, no concrete plans kind of girl, because I like to have the option to not do anything. I have friends who always have plans on the weekend, which is great for them but their schedules stress me out [not really, but you get what I'm saying]. But, after this weekend, I think EVERY SINGLE WEEKEND until December is booked. Mind you, these are all fun things I am excited about, but I already feel overwhelmed. 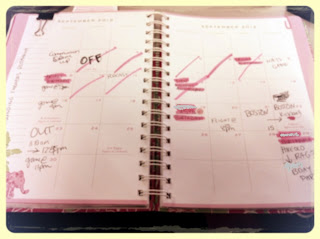 Thought Number 4: When will America figure out that singing shows are boring? I hope soon, all of these Talent shows get on my nerves. We already have Carrie Underwood, we don't need anyone else :)!
Thought Number 5: I'm noticing a MAJOR mean girl streak in blog land recently, what about you? Luckily, I'm a super small time blog and have YET to come across a rude commenter, [please don't start now], but I've seen some MAJOR hateration on big blogs. Bullying is rude and wrong in every shape or form. Just because you don't like someone, or their blog that doesn't give you the right to be MEAN. Stop reading, it's really simple. I admit there are some big time blogs that drive me nuts, so I stopped reading them. I'm not gonna post about why, because that's mean. I'm sure people think I'm vapid, too girlie,ridiculous for playing kickball [tell me what other adult sport you can earn 10K playing if you are hating] a poor writer and don't like my clothes, but hey that's fine, to each their own. I just really wish women in general would build each other up instead of cut them down. Down with the Regina George's of the world!

Those are my THOUGHTS!

Have a great day!