Paris Truly Is the Most Magical City {Picture Overload}

Our first full day in Paris started off in Versailles and our breakfast was not very good. We settled on a pub just outside of the gates of Versailles and we paid for the localization, it was by far the priciest lunch we will eat this trip. The waiter had to info us that beef carpaccio was raw beef, and we took a slight offense before realizing that he has probably dealt with countless Americans who order it having no idea what they are getting. 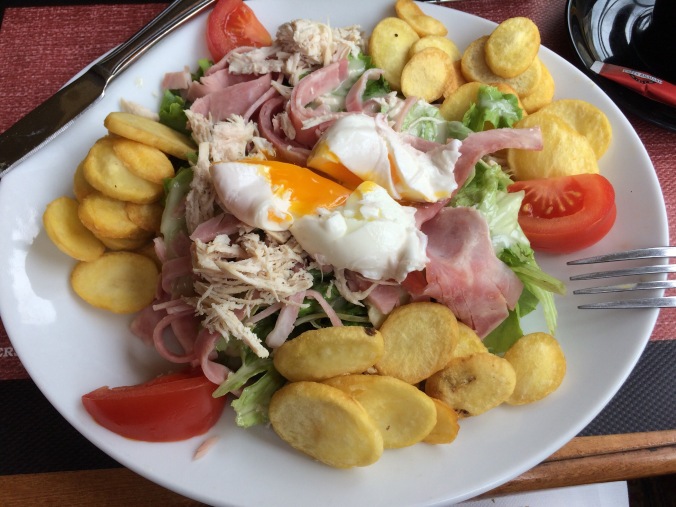 We hopped on the regional train with one transfer and a short walk to our hotel, 45 minutes was our assumption. Panic mode set in as our transfer train station is currently under renovation. We spoke to a train employee who directed us to go back 2 stops to take 2 transfers. This did not work out as directed as the train we hopped on continued in the wrong direction. We rode it to the next stop, got off and by deductive reasoning, and honestly some dumb luck we walked in the correct direction to the next metro stop. 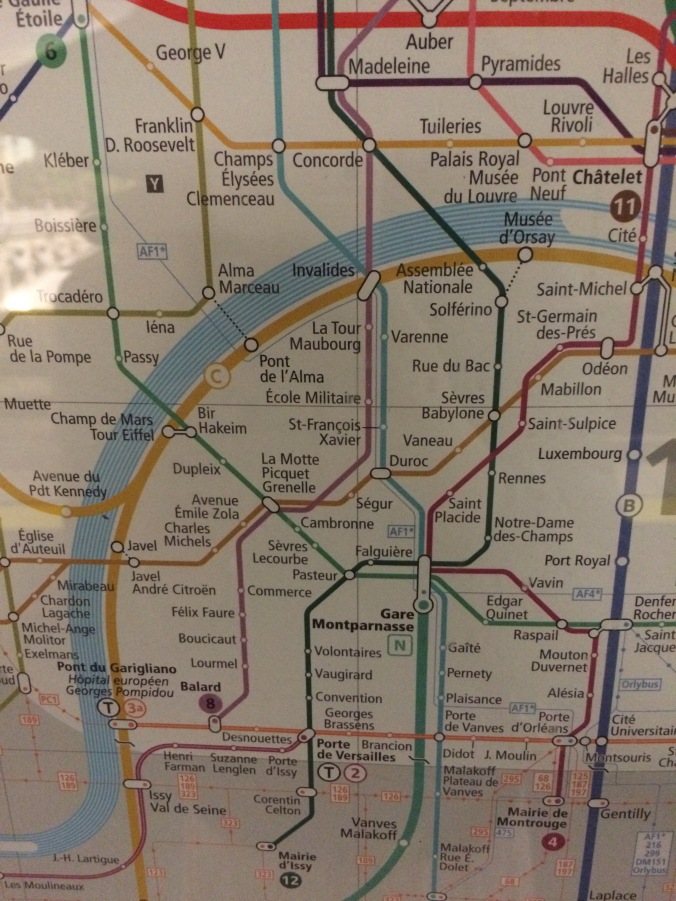 We finally made it the hotel and were able to check in an hour early and got some time off our feet and some time with the TRX before our night tour. 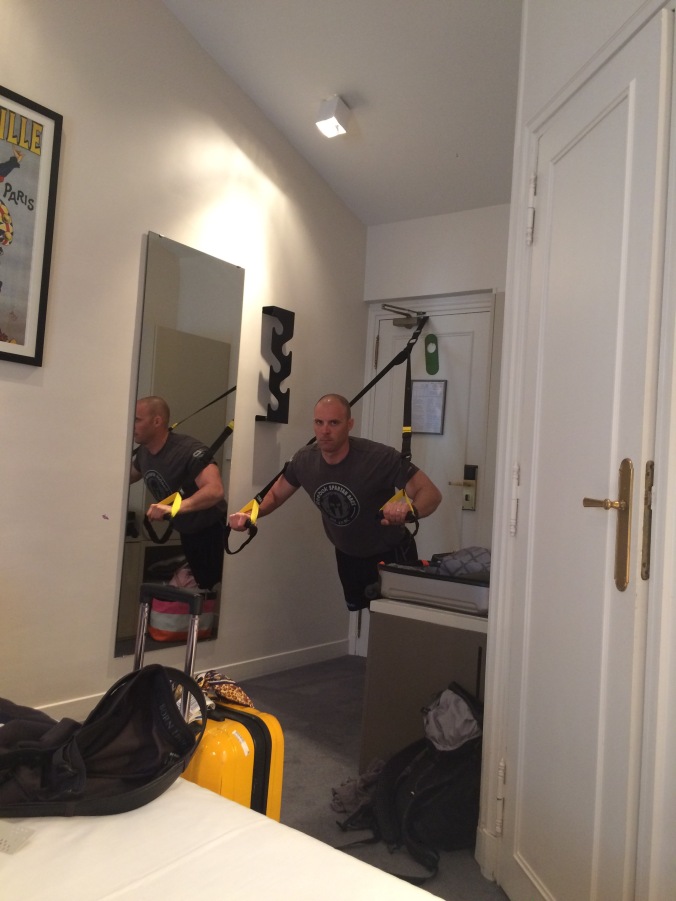 We saw Paris first from the Seine River then from a bus and finally from the top of the Eiffel Tower. The Siene River cruise was a good start to the evening. Despite the temperature being in the 50s with lots of wind, again, we spent a majority of the cruise on the top deck to take in all the views and see Notre Dame and the Eiffel Tower, etc. 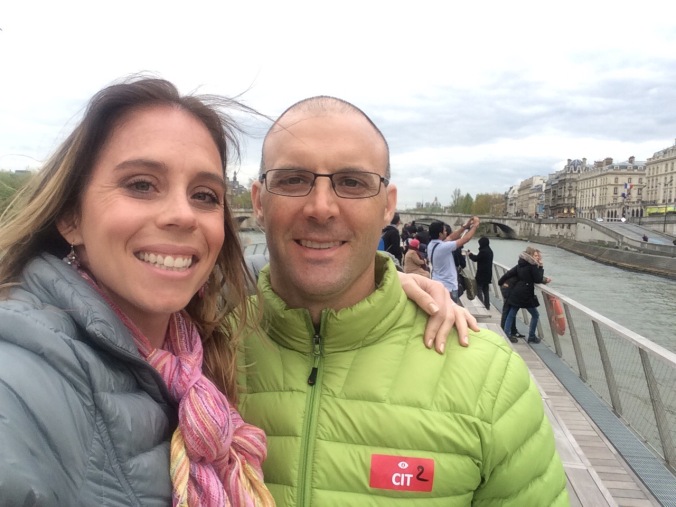 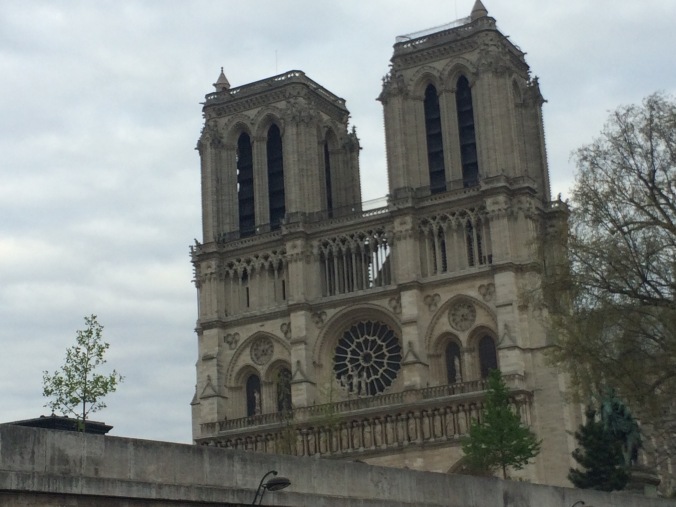 After assuming the tour was going to be in all English and finding out through experience that 4 languages were being rotated we were a little hesitant about the bus tour. Turned out they had us covered with headphones and a select your language menu. Who knew the oldest monument in Paris is a 3300 year old obelisk and was a gift from Egypt?!?
The Eiffel Tower, iconic, intimidating and somehow always showing off her good side. First, it is HUGE. So much bigger than than the one Gru stole from Vegas. We had a moment when all the street sellers sprinted off and the senses went off a little. We both started looking for anything out of the ordinary but we didn’t see anything to weird so we continued on and didn’t think about it again. We decided to go to the top before we entered and it was a good choice. Although the wind was driving like crazy and the temperature was in the rest by the time, roughly 22:00 local, the decision was rewarded with some wow views and an experience of a lifetime. 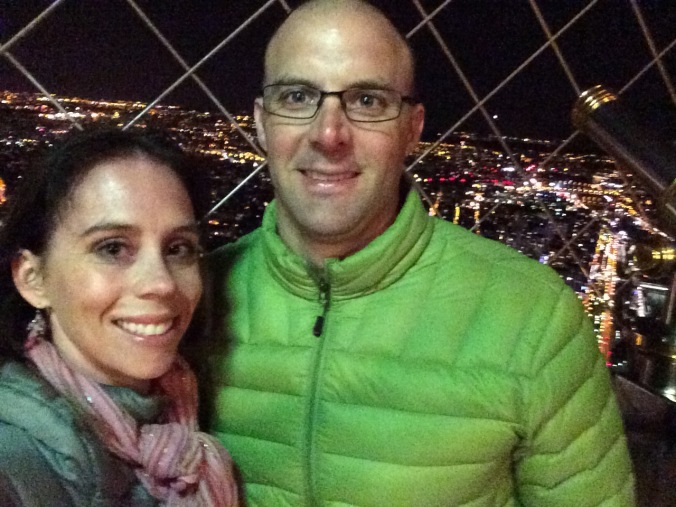 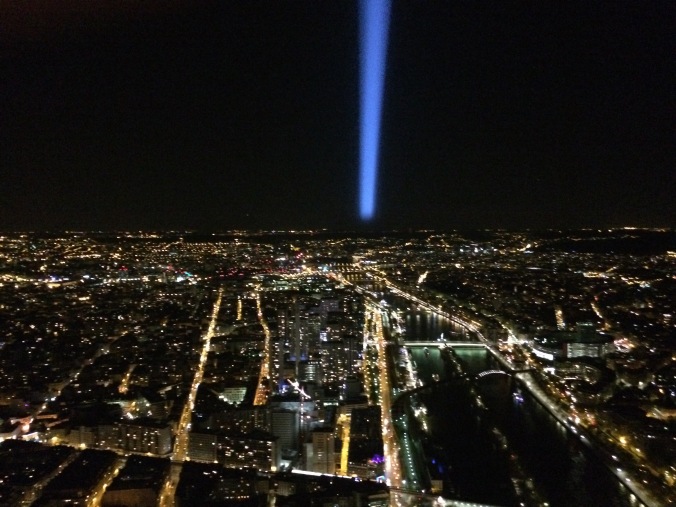 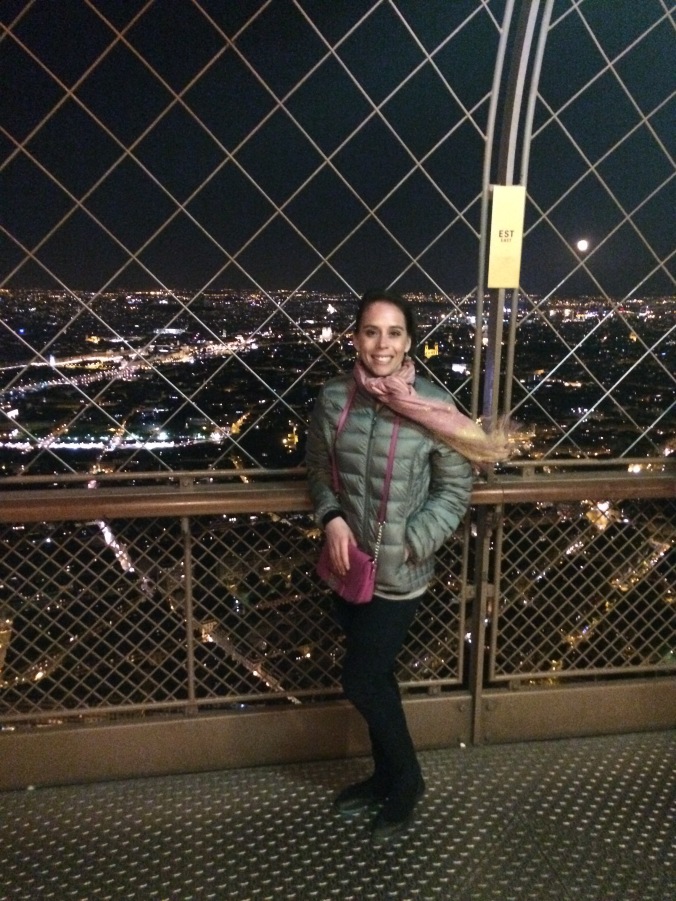 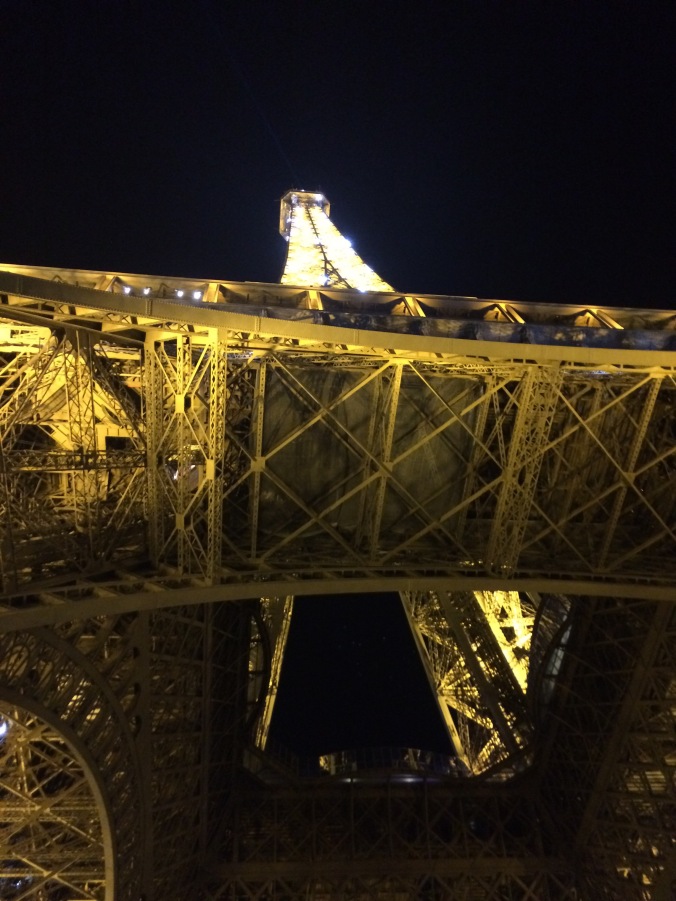 Once we were done with the tower it was time to head home in a uber and rest of for the next day. Sadly, the morning was cold and dreary and not really ideal for sight seeing but since it was our last day in Paris, we got after it.
The plan was to walk to breakfast (a few blocks since everything around our hotel is closed on Sundays) then explore the city. We enjoyed our leisurely breakfast and decided to give the bike share a try when we walked past. It took a bit of figuring out but we finally managed to pick our bikes and head off… Just in time for the big rainstorm. We tried to brave it for a few blocks then realized pressing on was futile so we locked up our blocks and took cover in a little cafe. Our second espresso of the day was delicious and we were able to dry off for the most part so we headed back to the hotel.
A quick change (and added layer) later it was Operation See All Of Paris take two. The clouds held on for most of the day but we were able to see the sun a few times. 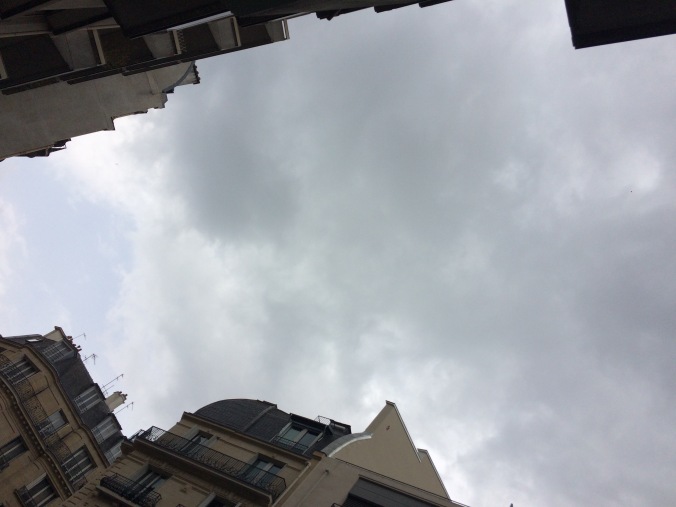 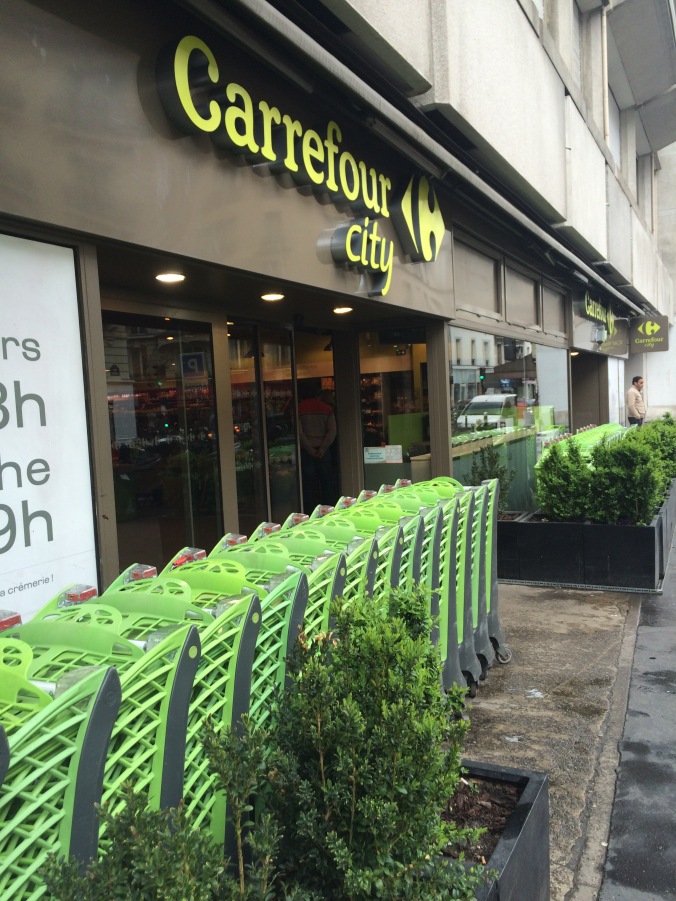 Our first landmark to see was the Statue of Liberty and we passed the beautiful Eiffel tower on the way.

Biking around Paris is nothing like DC. Drivers here give you more space and there are also bigger lanes to share with buses. Note: biking on cobblestone roads for an extended period of time is not fun. Find the side walk option if possible.
After a few missed turns and some people watching we finally made it to the statue. And I laughed out loud because I had NO IDEA it was so tiny. It made me think of Gru in Despicable Me justifying the one from Las Vegas, just funny!

Once we snapped the token picture it was off to Notre Dame. Well kind of. Le Husband decided he wanted to see the Arc de Triumph so we detoured up a few streets. The detour lead us past the new LOCK area since the bridge locks were taken down. 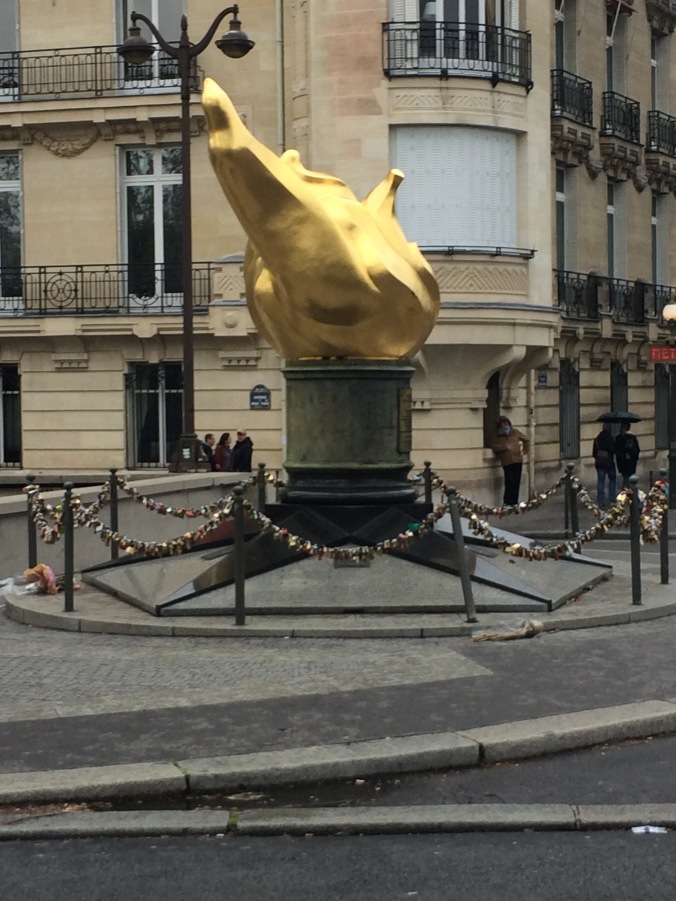 The Arc de Triumph is incredibly majestic and it felt quite poignant seeing it in person after all of our time in Normandy. Everything came full circle in history you might say. 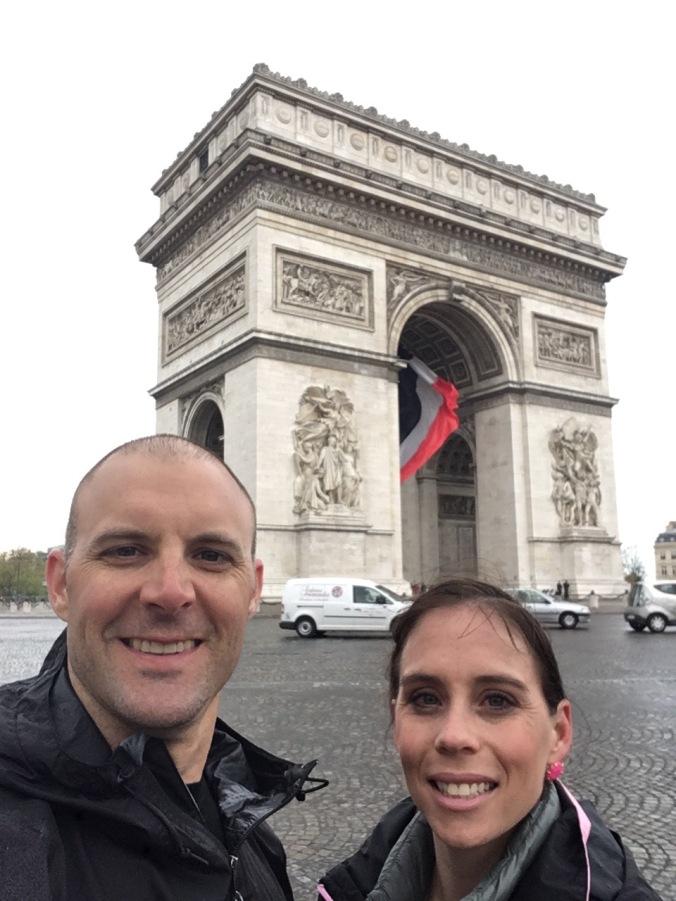 We kept biking and came through the huge center circle of town. It looks intimidating but the traffic flows extremely well, much better than in DC. It was here we had to take cover under a bridge because it started raining again. We hung out for ten minutes and then thankfully the rain stopped for the rest of the day. 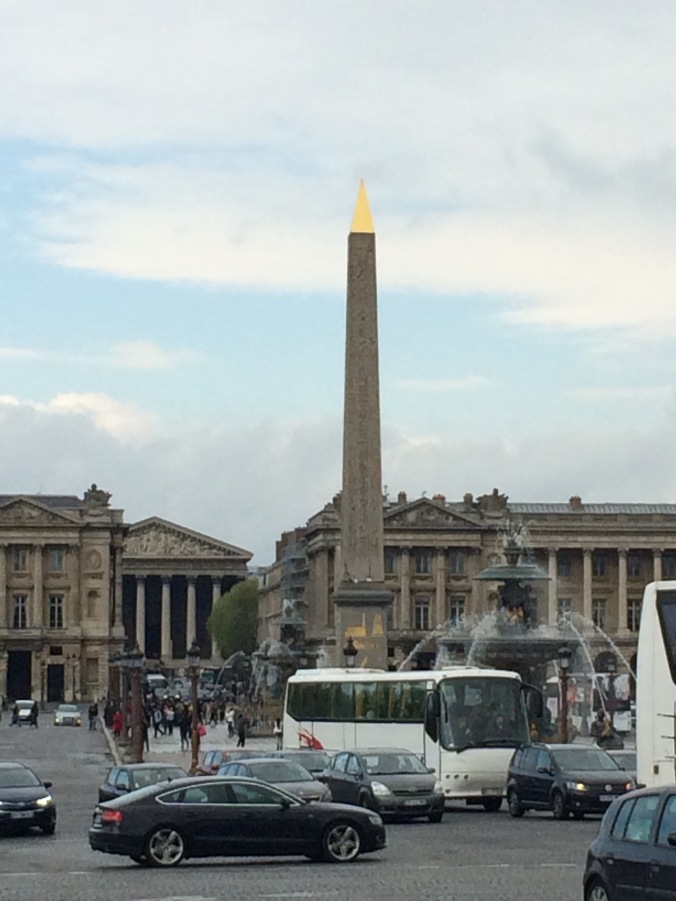 On our way to the Louve we passed a demonstration about the Albanian genocide, with what looked like and Albanian ambassador speaking (he had on very distinguished clothing and a sash). I was completely flabbergasted at what appeared to be a lack of security. There were a few police officers around but I could have walked right up to the stage as there was no barrier. It was quite strange in a city where soldiers carrying   M-16s are everywhere.
Anyway, we finally made it to the Louve and tried to take the touch the top of the triangle picture. 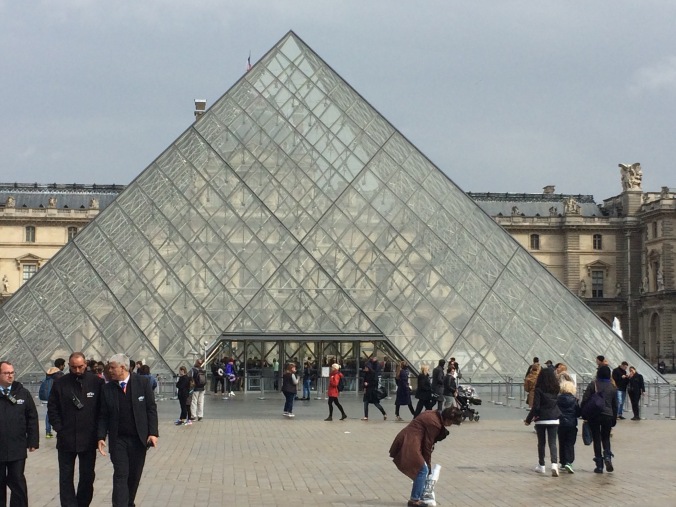 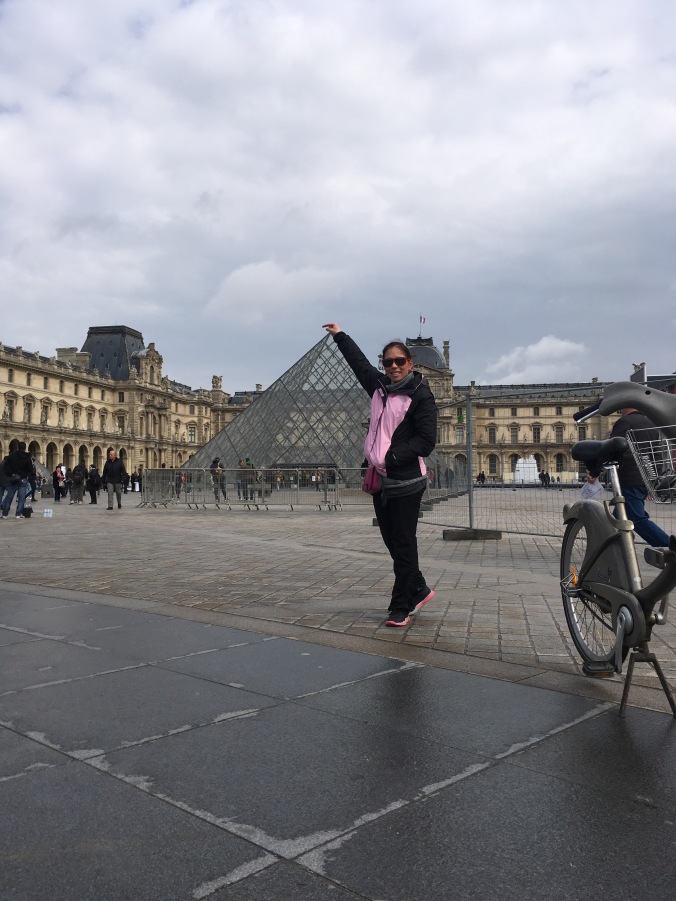 The final destination of the day was Notre Dame and we just missed the free organ concert. We were able to hear the bells toll a few times and they rang so clear. The structure is massive and breathtaking  and it is incredible it made it through so many revolutions, wars and fires.

The line to get in was only five minutes so we were able to sneak inside for a quick peek at the gorgeous ceilings and windows. Service was going on so we didn’t stay too long. I felt a sense of peace inside, just an amazing house of worship. 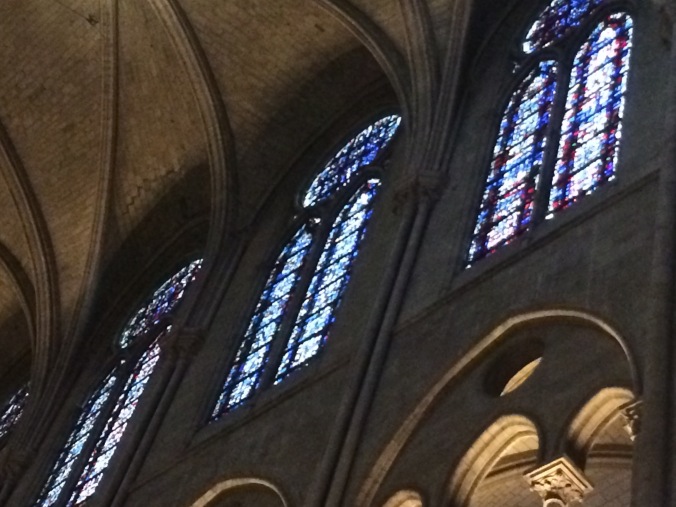 Once we left Notre Dame we biked another mile or so and then locked up the bikes for a final time. It was so fun biking around the city and it let us witness a lot  more than if we had just walked.

We stopped for an early dinner on the way home and it was the perfect way to end our long day.
What we ate: Today was our first French breakfast and it was quite delicious. We had an extra espresso this morning when we ducked out of the rain and dinner was so so divine! 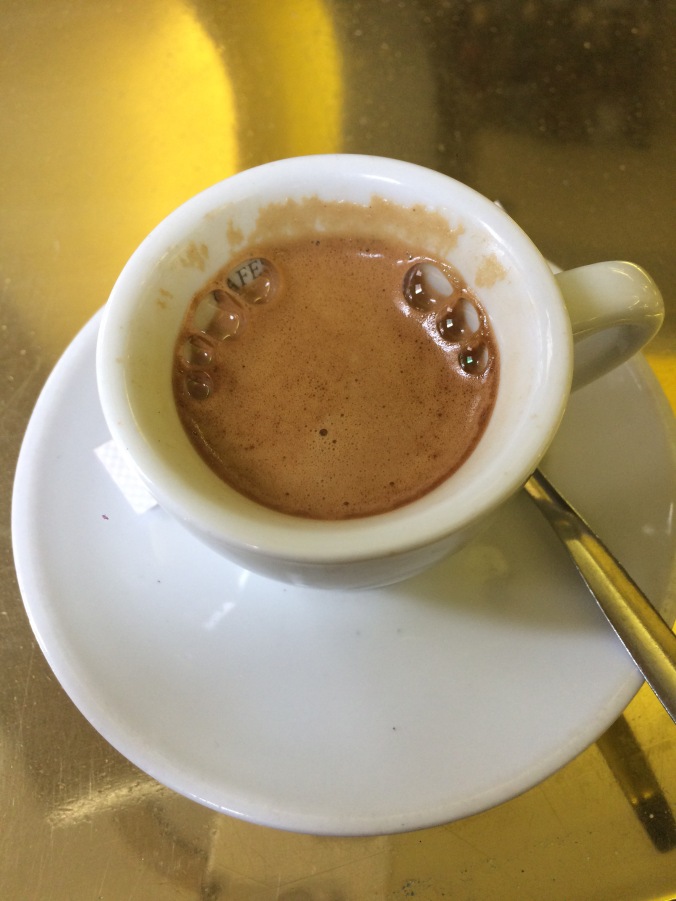 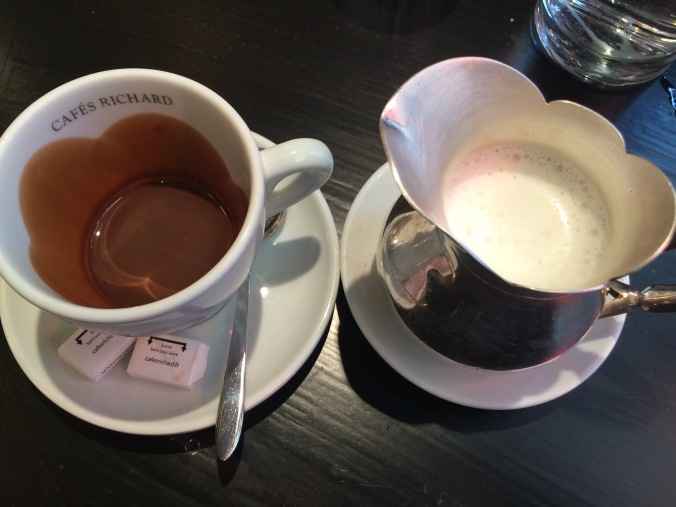 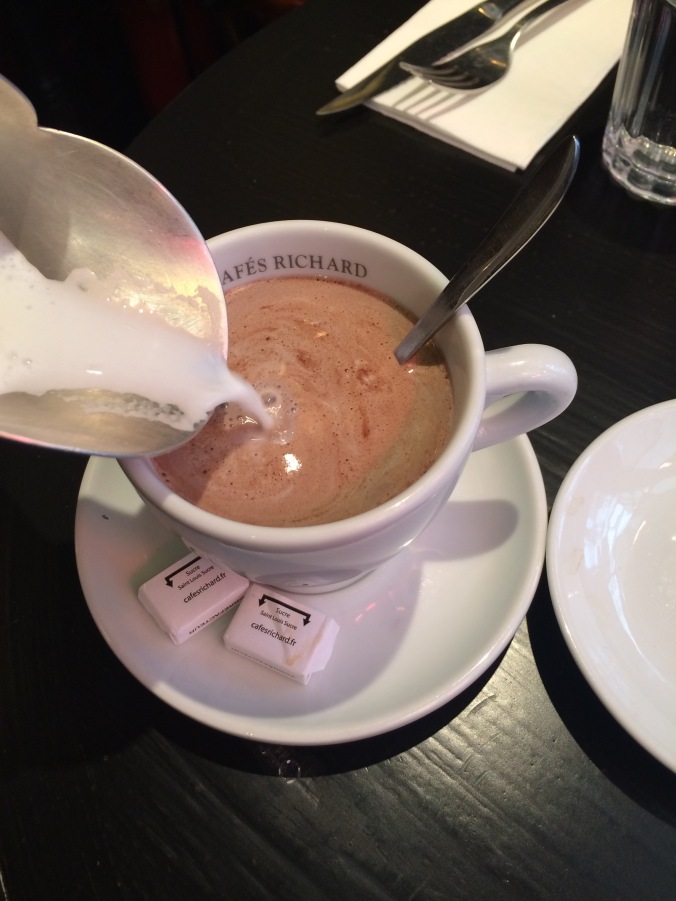 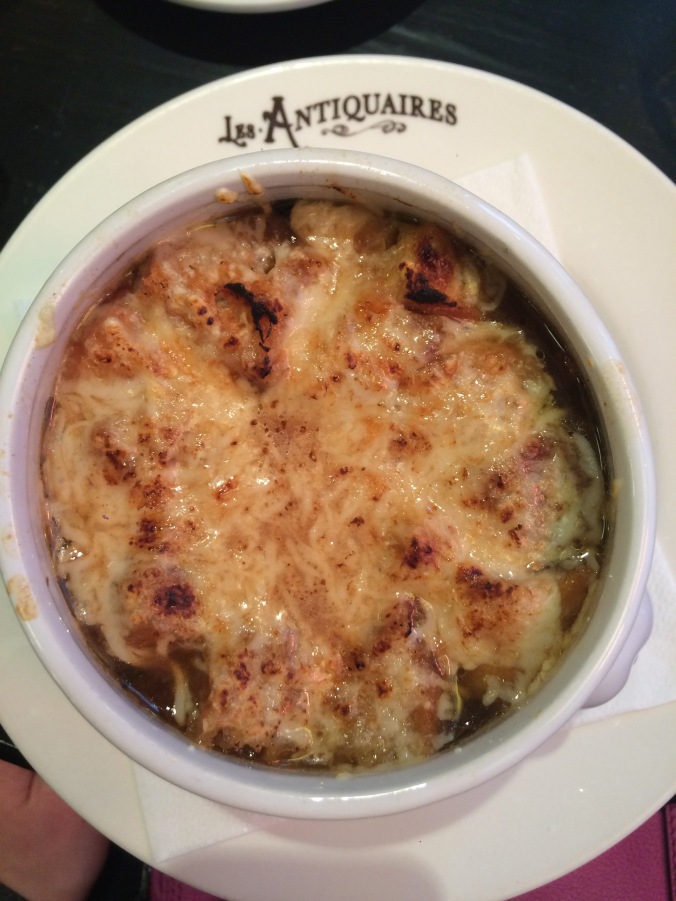 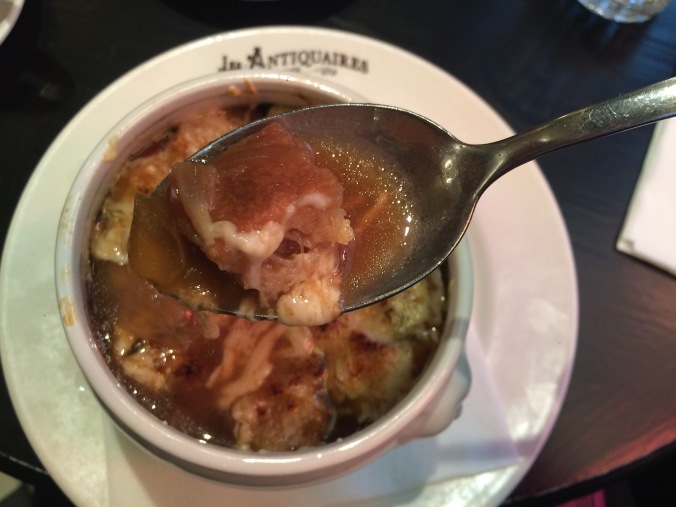 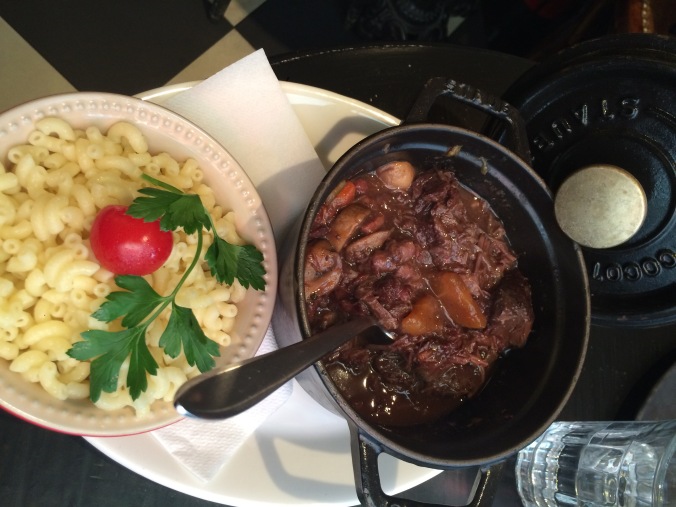 Even with the rain, this city is unbelievably amazing. I loved every moment and hope everyone gets to experience the beauty once in their lifetime. Next week I'll start recapping ITALY!!!