I've been Locked Up "theywontletmeout"

Well y'all, we SURVIVED PRISON!
[Don't know what I"m talking about, check out *this* post]

For five hours Sunday night, Sportyspice and I were LOCKED-UP in a prison, attending a 'Kairos Closing' ceremony with our church's Kairos Ministry group. 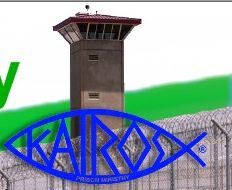 When I say locked up, I mean locked up.
Barbed wire, guard towers and EVERYTHING!

We walked through the courtyard to the cell block [after turning in all accessories, our license and being patted down] and I remember my HEART beating rapidly when I saw the guard towers.

For those of you who have NOT every been to jail or prison, most television shows get it right. You  have to be buzzed in EVERYWHERE! There are gates and fences and guards EVERYWHERE!

I tried NOT to have any expectations about the evening,
but I can tell you there were MANY things I did not expect.

I expected to be in a room with inmates residents and Kairos personnel.
I DID NOT expect the residents to be walking around the room and just talking to us like were at a normal gathering.

I expected to be a little nervous.
I DID NOT expect to feel SOOOOO protective of SportySpice.

I expected to be moved by the atmosphere.
I DID NOT expect to cry and tear up listening to the residents tell their stories.

I expected a church service atmosphere.
I DID NOT expect to forget I was in a prison while singing hymns.

I expected the residents to be respectful because of the program.
I DID NOT expect to be treated so well, so kindly and waited on.

I expected to leave the prison with a new perspective.
I DID NOT expect to have SO MUCH compassion for people who have done wrong.

God was truly working in that room I WILL tell you that. People were accepting Christ and wanting to change their lives for the better.

And for all the skeptics out there, yes, I understand 'these people' can be 'deceiving' and can act, but I CHOOSE to believe they WANT to be better and change. Residents have to APPLY to be part of the Kairos weekend and many this session have applied multiple times before.

There were MANY residents that spoke about JUST wanting to eat the 'FREE' cookies provided, but how MUCH more the weekend became to them.

THEY want to change!
THEY KNOW they have a second chance!
THEY understand LOVE and not hate!

One young resident truly touched my heart when he shared his testament. He was a former gang member and was VERY skeptical about the weekend in the beginning. He spoke of not showing his emotions and NOT letting anyone in, that life is a BATTLE.

The last thing he said was
"I used to know BLOOD before TEARS.
NOW I understand it's TEARS before BLOOD"

I wish I could explain MORE about this experience, but truly it is something that is SO hard to explain.

You are walking around in a room full of 'bad' people who did SOMETHING to be there, but they are JUST people. I gave high fives, handshakes, fist bumps and even hugs to these men. We were told multiple times how THANKFUL they were we CHOSE to drive 2+ hours to be there. Especially at 'our age'.

Was I fearful and scared at times, HECK YES!

We were standing, sitting, singing and walking around with criminals.
Some getting out next year and SOME in there for life.

But, the Kairos regulars acted like being there was normal life.
They greeted all of the residents with hugs and 'how are yous'.

I must admit I was baffled for the first 10 minutes, but after chatting and interacting with the residence I understood.
There is a kinship now, as crazy as that sounds. I feel for those men and have thought about them since we left Sunday night.

I asked SportySpice to share her thoughts about the experience so please enjoy!

"Prison…never thought my sister and I would land ourselves here!! Well, I am glad it is because we want to spread God’s word and not because I decided to hurt a certain person who cut me off in traffic [kidding]! The best way to to best describe it was…..an experience.
It is really hard to put in words. 90% of the time I pretended we were in a school, but then that other 10% would come around and I would realize I was in a room with 150 inmates WITH NO GUARD IN SIGHT! Good times. We did a lot of hand shaking, hugging and high fiving. It was very moving to see these men go up and share their emotional week. It really hits you when you see a criminal, who is in prison for life, break down in tears because he feels he has a second chance with God.
We were being waited on hand and foot by different inmates. We had an inmate body guard named Heavy that called us his little angels. I decided Pinky’s name would be “Sneaky Pinks” and mine would be “Swanky Swanks.” It was definitely an experience I will never forget. The Holy Spirit was definitely in that prison that night."


I am NOT sure Kairos is the 'ministry' for me, but I will contune to support the work with my prayers and possible become an 'outside' team member.

Maybe I'll start writing letters as well.
God only knows where I will be called.

All I KNOW is, I am GLAD I experienced the closing
and I HOPE and pray I am blessed and able to attend another one again.
My view on prison is forever changed.