And I'm doing a weekend recap?!?! Don’t judge me, work has been crazy and well, I’ve been lazy. The days are hazey…..okay I’ll stop.
This past weekend Le Beau {C} and I drove to his home town to pick up his apartment essentials he has stored at his parents’ house. Quick side story so you don't think he's a deadbeat lazywazy kid. C was pretty much an AllStar baseball kid growing up, played in college and then was drafted into the minors. He played for 3ish years before he was released because of Tommy John surgery (waaaaay bummer). He moved around alot to different teams and then came out this way to be an college assistant baseball coach. He was renting rooms, not an apartment and he didn't need any of his college or first home necessities so he stored them with his parents {Who doesn't like to use free storage, not this girl}. So, now that he has HIS own place he needs his stuff...hence Operation Road Trip 2011.
C sweetly invited me to go and see his hometown for the first time and I was pretty excited to see where he grew up. I was NOT exited for a 9+ hour trip each way though. I have travel ADD and get bored really easily. C on the other hand drives all the time, solo, and is happy as a pig in mud driving with music and the windows down. I am an AC on windows up kind of girl. He loves to drive to country, I love rap/pop/hiphop. I LOVE TO TALK....he is quiet. You see why I might have been a llllleeeeeeetlle bit anxious?!?!?
We hoped in the car Friday morning and drove the day away through these states: 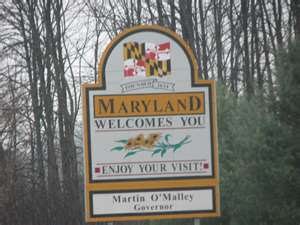 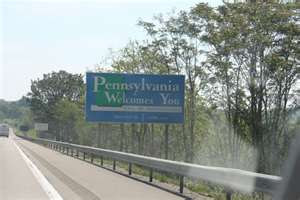 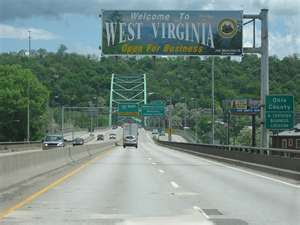 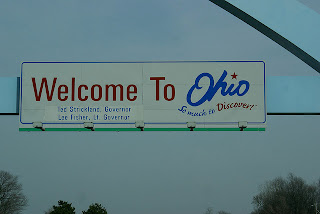 I have never been to Ohio and all I can say is man is that place flat. Not much to look at out the window. Thank goodness for sudoku, crossword puzzles, C and books books books.
oh and side note:
**I WILL NEVER TRAVEL THAT FAR IN A TRUCK AGAIN**
We arrived to his home Friday night and we were welcomed with a feast! His mom is an amazing cook {and uber tiny. Like, tinier than me and I'm mayjahly petite}. After dinner it was time to just hang out, eat cake, go through his things and of course watch some of this! 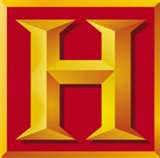 SOOO happy they love the BIG H like I do. After some TV time it was bedtime for this girl cause I was drained. {Sidenote #2: C’s parents had us stay in the same room, which really surprised me. I guess that’s the difference between having boys vs girls?!?!? All I know is until I am married Mama B and Daddy will make sure my BF and I stay in separate rooms. Thoughts from anyone??!?!?}

Saturday we got up to an amazing breakfast a la Miss Mama C and got ready to tackle the day. C’s cousin was playing in a Little League Baseball game so we headed out there before meeting his family at his aunt’s house. {Yeah, basically his WHOLE FAMILY –Mother and Father’s side – Lives in his hometown. For rizzle-rizzle! His grandfather went to his high school… old school}.

This was my first ever Little League game and I showed up in....wedges!!! Yep, you can take the city girl out of the city...hahaha! I didn't want to wear flips cause well, I'm short and didn't want to look tiny next to his family. After 3 innings of the game we headed to another field where his OTHER cousin (so.much.family!) was playing a game and his {gulp} grandparent's were watching. I was so nervous to meet the grandmother because she is the matriarch of the family and if she doesn't like you, well you are SOL! {Being protestant I think I already have a strike against me, since his whole family is catholic, but she doesn't need to know that yet} I think I was able to charm her though, fingers crossed.

We left the games and headed to his aunts house for some glorious food and pool time! The water was chilly but the sun felt oh so good! And did I mention there were Margaritas and wine, YUM-O! 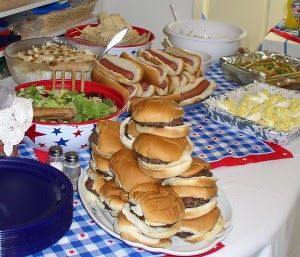 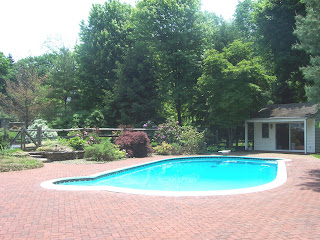 Sunday morning we got up, packed up and headed back home....well after a slight detour back to his aunt's house cause I left my Ralph Lauren sunglasses. Awesome impression right?!!?? UGH!

The ride home wasn't too bad, we stopped for some outlet shopping and C was in a really talkative slash goofy mood which I thoroughly enjoyed. The last 2 hours were tiring but I just had him tell me his baseball life story so he wouldn't get tired.

We got home and immediately passed out. 18 hours in the car in 3 days will do that to you. Monday was spent moving his stuff from my place to his new apartment and I got some family time at the pool and at a cook out. All in all a super busy but fun weekend. Looking forward to the nice relaxing one I have planned coming up.