Ello and happy[slashboo] Monday to you lovelies.

Again, I'm exhausted from a weekend full of kickball.

As I mentioned on Friday, I booked a last minute flight to join Le Beau
in the A-T-L for a kickball tournament with an availables team.
{basically a team made up of different people who's
REAL team didn't travel to the tourney}

Looking back today, I realized I was only in Georgia
for a little over 32 hours...WOW!

My flight was originally scheduled for 9pm but then was delayed to 930pm.
I thought the delay would be in my favor with traffic, but sadly I was mistaken. I arrived at the airport barely an hour before my flight left, but wasn't too nervous because security didn't look to crowded.

Yeah, it WASN'T crowded but only had 1 detector working
and it seemed like EVERYONE in front of me
had NEVER flown before.

Seriously people, what part of
"take everything out of your pockets and OFF"
do you NOT understand?

It took me 20 minutes to get through security when it would usually be no more than 10. If I wasn't already annoyed, the fact the TSA agent thought it would be funny and ask me if I was over 12 really put me over the edge. IN NO way shape or form is that a compliment....EVER!

When I got to the gate, I got my boarding pass, went to grab a sammich because I was
STARVING
and when I got back to gate
THE DOOR
WAS
CLOSED!!!

I may have shouted said 'NO WAY YOU'RE KIDDING ME! YOU CAN'T DO THAT"
because I still had 30 minutes till the flight left.

Luckily the gate agent said
"Oh don't worry, I was re opening the door anyway".
PTL y'all PTL!

Anyway, enough about my flight, I made it the ride was uneventful
and my main man C was there to pick me up and take me to the hotel.

Saturday morning we were up early and at the fields by 8pm.
The tournament was held in the ATL Silverbacks semipro soccer stadium and
the fields were turf and very fast.

I knew VERY few people on this team
since it was a missmash of multiple teams.
[don't get me started on the people who bailed...shady shady meffers]
There were peeps from ATL, Florida, NY and DC
and we all got along pretty well from the beginning.

We won our first game which was HUGE since this was the first time
everyone had played as a team together.
Unfortunately due to some random errors we lost the next two games
to two of the better teams at the tourney mind you.
We crushed our last pool play game which was pretty awesome. 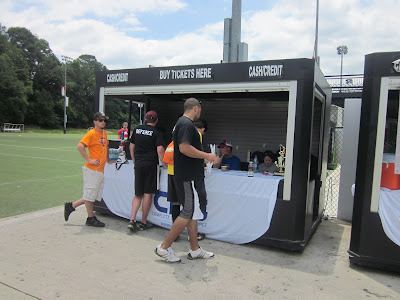 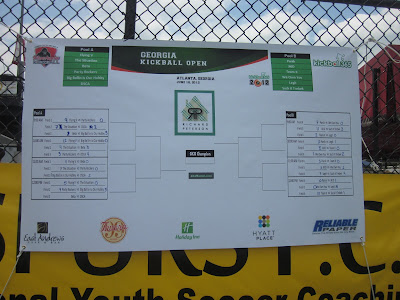 Because of our errors our RUNs against ended up hurting our seeding
for the elimination round and we had to play one of the teams we lost too earlier in the day. 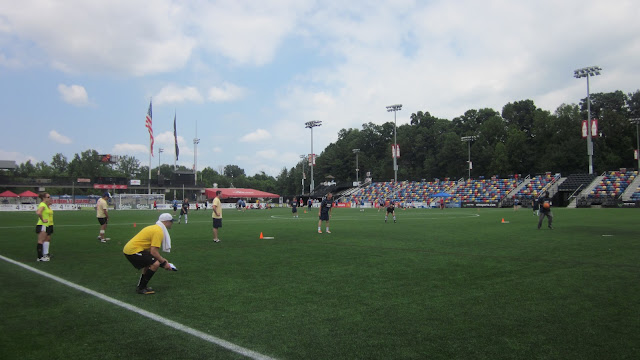 This time we played MUCH better and only lost 2-0 because NO ONE could get on base. Seriously, we had a man on 1st and 3rd with only 1 out and we couldn't bring a run home. DAGGER!

I'm way bummed we were in the HARD pool and didn't make it past
the first round of elims.
However, the team was awesome and I had a great time! 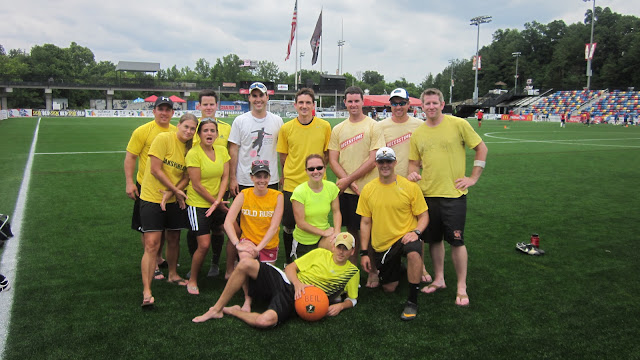 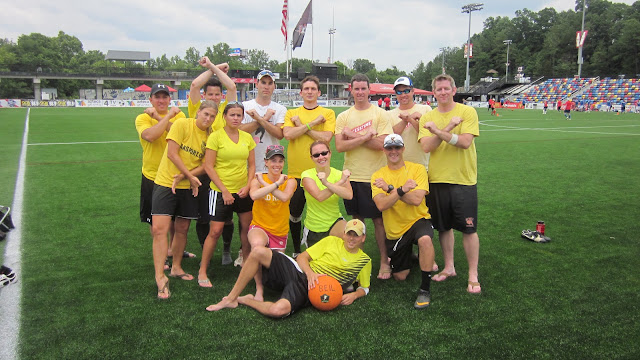 The team we lost to ended up losing [hahaha] in the finals to the home team,
and I am glad the home team won. They are a great group of peeps.

After the games were over we went to get pizza and
get ready for the after party.
We were all exhausted, but the after party ended up being a lot of fun.
I learned how to wobble and C ran the cornhole tables all night.
I was dunzo around 11ish, but we stayed till about 1230ish.

SIDENOTE: Sadly I wasn't able to meet me girl SMASHTASTIC because I didn't have a car. SO SUPER BUMMED it didn't work out, but had fun texting with her during the day. ONE DAY GIRL!

If you thought I was a bum for leaving the party so early, let me tell you our flight left at 7:30am
so we only got 4ish hours of sleep.
I tried to sleep on the way home but the sweet old man next to me
decided he wanted to chat.
NBD he was sweet and fun so I just took a 3 hour nap yesterday.

That coupled with going to bed at 930pm last night and I FEEL
MUUUUUUUUUUUUCH better today.
Still a lil dizzy from the whirlwind of a trip, but it was worth it.

Sunday we also celebrated my favorite daddy in the whole world!

How was your weekend? Do anything fun?

OH AND....
Pssssssst....did you see the NEW page I put up top? The Girl in P!NK!
Check it out and let me know what you think!